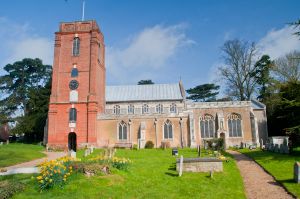 Good gracious this is an attractive church. At first glance, Grundisburgh's rather unusual brick tower looks like it belongs to an industrial works rather than a church, but it rather grows on you.

The tower was built in 1732 to replace a medieval one that had outlived its useful life, and to provide a better home for Grundisburgh's ring of 10 bells. The man responsible for the new tower was Robert Thinge, whose largesse is remembered by a plaque above the south door.

Also immediately obvious as you walk up the path to the door is a large sundial set against the south wall of the tower, below a Victorian clock - as if the Victorians did not quite trust the sundial. Both timepieces are set below a round-headed window that would be perfectly at home in a railway station.

That isn't meant to be unkind, for St Mary's is a delight to visit. Walk under the brick doorway into a lovely interior, lit by the large windows of a 15th-century clerestory, the gift of Thomas and Anne Tudenham, whose monogram you can see worked in stone on the exterior.

Facing you as you enter the nave is a magnificently coloured medieval painting of St Christopher, in his usual position opposite the door. The painting was only discovered in the 1950s, and retains amazingly rich colours and shows the saint with mermaids looking on as he carries the infant Christ across the water.

Christ's head has suffered the indignity of being cut away to make space for the clerestory above, but in all other respects, this is an example of medieval wall painting at its best.

There are two further wall paintings; one over the rood-loft stair, and another on the south side of the sanctuary.

This latter painting was found underneath the St Christopher painting and was carefully transferred here. It shows what appears to be a group of women socialising, while a devil listens on and records their conversation, presumably as evidence to be used against them come Judgement Day.

Look up and you will see one of the best double-hammerbeam roofs in Suffolk, decorated with a mix of original 15th century and replacement angel figures. Other excellent historical features include the rood screen and parclose screen, still richly coloured.

There are numerous memorials to members of the Blois family, but the most impressive memorial in the church is a wall monument to Martha Brook (d. 1657). There are also a series of brass inscription plates at the end of the south aisle.

One final feature worth noting is a huge Garter banner hanging over the font. This banner originally hung at St George's Chapel, Windsor, the home of the Order of the Garter, and it commemorates Baron Cranworth.