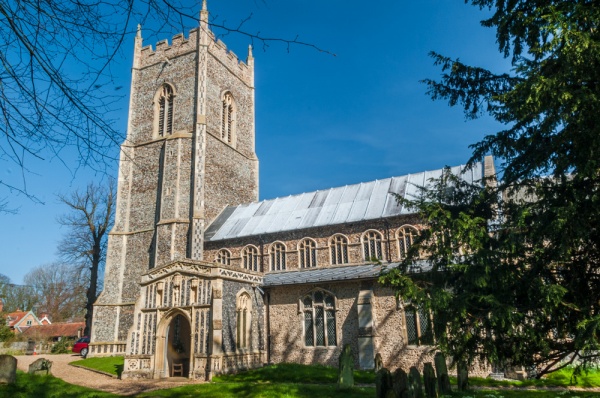 The beautiful parish church of St Mary of the Assumption is one of the great English churches. Visitors are drawn from across England to view the extraordinary medieval woodwork, including an unmatched set of carved bench ends and a stunningly ornate font cover.

There is no record of a church in Ufford at the time of the Domesday Book of 1086, and it appears from several large pieces of carved Caen stone in the south aisle that St Mary's was erected in the late 11th century.

Around 1200 the church was enlarged with the addition of a chancel, and the nave was extended westward around 1250. You can easily see the change in architectural styles in the westernmost nave arcades. A tower, clerestory, and south porch were added around 1450.

Set into a sculpted 15th-century niche in the face of the tower is a bronze statue of the Virgin Mary, installed in 2007 to replace a statue that was probably removed during Cromwell's Commonwealth. 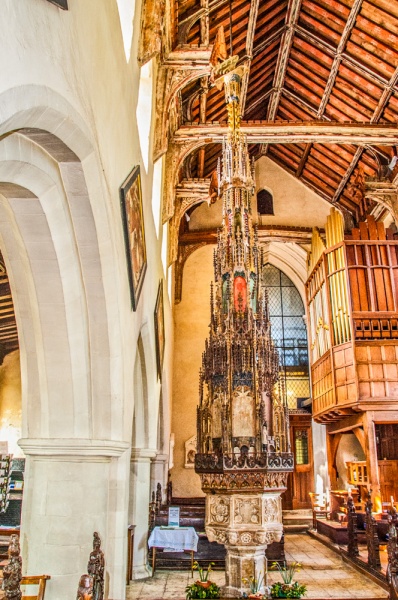 You enter the church through a 15th century south porch with beautiful flushwork panels and ornate triple canopied niches over the arch. In the porch is a late medieval holy water stoup.

The last half of the 15th century the Willoughby family financed the superb nave roof, font cover, and rood screen. The coat of arms of Sir Christopher Willougby can be found throughout the church, a reminder of his beneficence.

The two easternmost bays of the nave are 12th century, while the four central bays are 15th century, in Perpendicular style. Over the nave soars a wonderful late medieval roof with alternating tie-beams and hammer-beam. The main timbers are painted with geometric patterns and the sacred IHS and MR monograms (IHS for Jesus Hominum Salvator, or Jesus, Saviour of Mankind, and MR for Maria Regina, or Mary Queen). 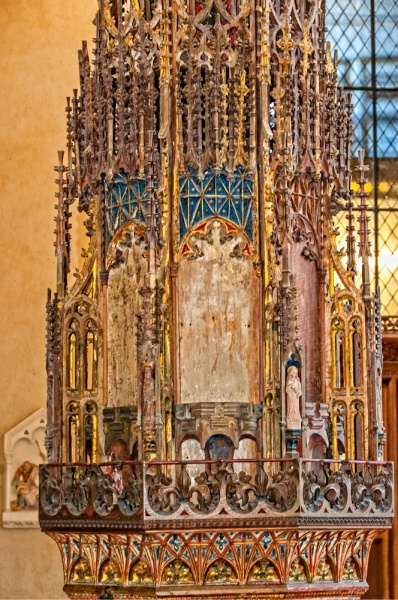 As beautiful as the roof is, it pales by comparison to the astonishing font cover, a quite remarkable piece of medieval woodwork, rising in ever-diminishing layers towards a gilded figure of a Pelican in Piety. The cover was made around 1450 and has been called the most beautiful in the world. seeing it in person, it is had to argue with that assessment. It was originally gilded and vividly painted but only parts of the original colouring remain to suggest what it must have looked like when new.

The cover rises in canopied niches, each smaller than the last, and each niche is decorated with delicate pinnacles. The lower sections of the cover telescope up so that the font could be used for baptism without having to be physically removed.

The cover is so high that I found it difficult to take a photograph that didn't cut off the top or the bottom.

How on earth did the font cover survive the efforts of the Puritan iconoclasts? William Dowsing, who did so much to destroy 'Papist' works of art in East Anglian churches, visited Ufford on 21 August 1644. He recorded in his journal that 'There is a glorious cover over the font, like a Pope's triple crown, a pelican on the top picking it's breast, all gilt over with gold'. Apparently the dour Dowsing was moved to spare the font cover, and his description of the wonders of Ufford church is the longest entry in his journal. 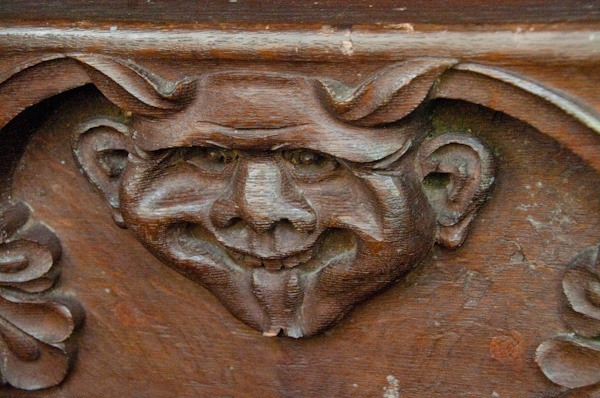 Once you've managed to tear your gaze from the font cover - which isn't easy to do - you'll see that the nave is full of beautifully carved 15th-century benches. The benches stand on a castellated sill, with leaf patterns carved into the bench backs. The bench ends are stunning; a marvellous array of carved figures rising above traceried panels. The detail of these panels is extraordinary, with intricate tracery designs and geometric patterns surrounding tiny faces.

The bench finals are stunning - there's that word again. The variety of subjects is exceptional from a chained stag to grotesque creatures, human heads, fruit, heraldic symbols, and serpents. One bench has an extremely odd medieval depiction of a camel, obviously carved by someone who had only heard about the beasts but never seen one. One end panel is carved with a full-length figure of a woman wearing a butterfly headdress, a style in vogue from roughly 1450-1485.

The most famous bench stands directly in front of the font. It is known as the Margaret and Catherine Bench, and shows seated saints dressed in 15th-century style. The carving illustrates fashions of chairs and hair styles in the late 15th century. 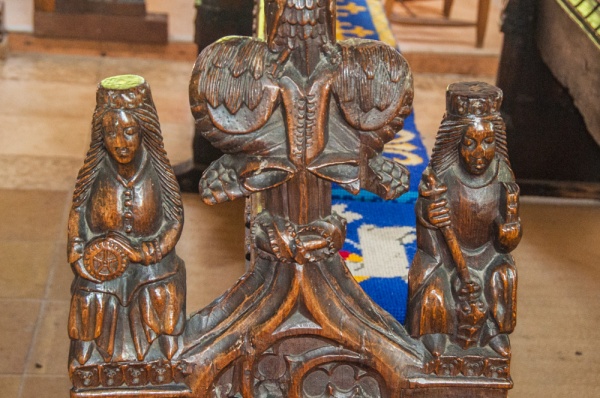 The Margaret and Catherine bench end

Separating the nave from the chancel is a 15th-century rood screen, minus its loft. The screen base is divided into panels painted with likenesses of saints. These paintings suffered badly at the hands of Puritan iconoclasts, and are almost obliterated in places. The wooden tracery over each painted figure is superb, like delicate lace.

According to a tale in the excellent church guidebook, the top section of the screen was sawn off during the 18th century when the octogenarian rector was annoyed that he could no longer make himself heard while conducting services behind it.

In the south aisle is a small chapel dedicated to St Leonard and reserved as a war memorial. The altar and furnishings were designed by Sir Ninian Comper. Against the wall is a dropped sill sedilia, or clergy seat, beside a very nicely carved angle piscina. The wall retains traces of medieval wall paintings.

The chancel is striking, with high altar furnishings that seem out of place in a Suffolk country church. On the altar are early 18th-century Italian candlesticks and an ornate crucifix. But though the altarpieces are eye-catching, the real historic treasure in the chancel is a series of 15th-century misericords. On the south side are two cheerful, smiling faces, while opposite on the north side are coats of arms of the Willoughby family. 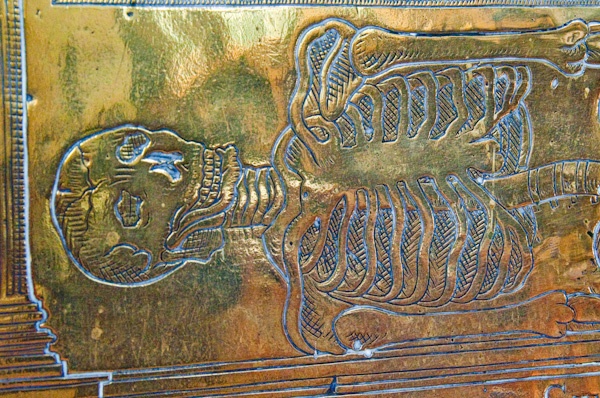 Set into the floor are several worn memorial brasses, but the best brass by far is a beautifully preserved example on the wall, commemorating Richard Ballett, a London goldsmith who died in 1598.

The brass shows a skeleton lying beneath an ornate tomb, under an inscription reminding the reader of mortality, and a shorter inscription beneath giving details of Ballett's life and death. The detail of the engraving is exquisite, and you can pick out every bone in the skeleton and every intricate detail of the family coat of arms above.

St Mary's deserves its reputation as one of the most beautiful and fascinating historic churches in England. It is an absolute delight to explore and thankfully is usually open daily to visitors. 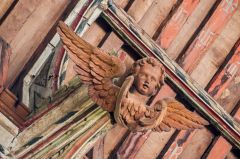 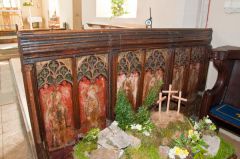 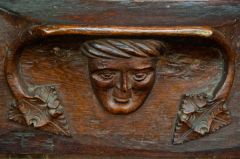 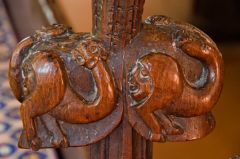 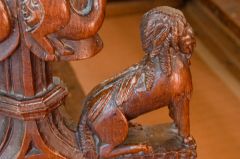 Nearest Accommodation to Ufford, St Mary of the Assumption Church:

More self catering near Ufford, St Mary of the Assumption Church

More Hotels near Ufford, St Mary of the Assumption Church

More bed and breakfasts near Ufford, St Mary of the Assumption Church