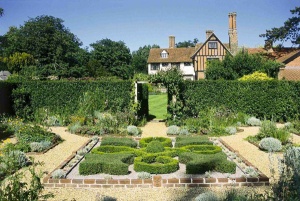 Otley Hall is a 15th-century moated manor house set in 10 acres of parks and gardens. The house is an excellent example of late medieval architecture, with a profusion of chimneys, and a multi-levelled tiled roof. The half-timbering of the original house can be seen in places, though much has been covered with later brick and plaster. The house has been remodelled from its original H shape to a T.

The oldest part of the house showcases a striking two-storey kitchen, complete with a gallery. The hall features the remains of an early wooden screen, mullioned wooden windows, and massive, shaped wooden beams. Linen-fold panelling graces the dining room, which looks out over the Rose Garden. There are striking frescoes commemorating the 1559 marriage of Robert Gosnold III and Ursula Naunton.

The Gosnold family came to Otley as tenants as early as the turn of the 15th century, though later they were able to buy Otley. The Gosney heritage will be of particular interest to American visitors, as Bartholemew Gosnold was responsible for the founding, in 1602, of Cape Cod, and Martha's Vineyard, named after his daughter. In 1613 Gosnold helped found the colony at Jamestown, Virginia.

The gardens at Otley are worth a visit; among other features, they boast a croquet lawn, canal, nutteries, a rose garden and a moat walk. More strikingly, perhaps, is the symbolic nature of the modern knot gardens, designed by Sylvia Landsberg, author of The Medieval Garden. The knot garden is created to symbolize the Universe; each of its 25 beds represents a different civilization.

The house is available for private guided tours and for conference functions and social events. 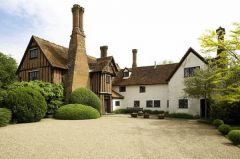 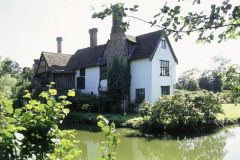 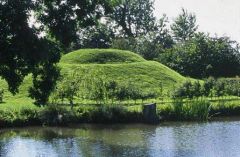 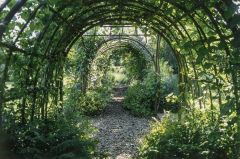 More self catering near Otley Hall