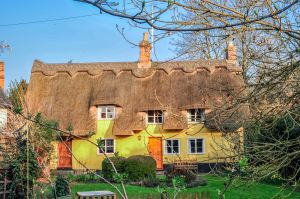 Hartest is an attractive little village just a few miles north of Glemsford. How attractive? Well, Simon Knott, the mastermind behind the Suffolk Churches website, says, 'East Anglia has plenty of pretty villages, but few of them are as lovely as Hartest' and I have to say, I agree.

The village is laid out around a huge green, with lovely period cottages ranged on all sides. Stroll around the green on a summers evening and see if you don't agree that it is one of the prettiest places in Suffolk.

On the village green is the Hartest Stone, a huge granite block discovered in Somerton in 1713. It was brought to Hartest to commemorate the Treaty of Utrecht that brought an end to the War of the Spanish Succession. To mark the end of the war, 7 July 1713 was declared a day of general thanksgiving, and celebrations took place in towns and villages across the country.

In Hartest it was decided to mark the occasion by bringing the granite stone to the village green as a memorial. It took a team of 40 horses to haul the stone to the green on a specially built sledge, with a trumpeter on top.

Local tradition says that the stone will turn over at the stroke of midnight and that sitting on the stone at midnight will bring good fortune (or a wife).

I photographed the picturesque houses around the green and wondered about the huge stone block on the green. There was no sign to indicate what it was for, and it was only much later that I discovered the significance of the unusual memorial.

There are over 50 listed buildings in Hartest, an indication of just how 'traditional' the village feels. The oldest is a timber-framed Wealden house dating to 1470.

Just off the green is one of these listed buildings, the parish church of All Saints. This beautiful old church is mainly 15th century, with considerable Victorian restoration work. The interior features a two-tier octagonal Jacobean pulpit.

Just behind a screen of high trees from the church is The Crown Inn, a beautiful old pub. The Crown began as Hartest Hall, owned by the Bishop of Ely and used as the residence of the bishop's steward. The Crown was a courthouse in the 16th century. It was converted to use as a pub in the 18th century but was still used for petty sessions until at least 1766. In 1778 Ann Butts, wife of the Bishop, gave the inn to her daughter, and it has been in private hands ever since.

Not all the interesting historic buildings in Hartest are ancient. The Boxted and Hartest Institute was commissioned in 1888 by Thomas Weller-Poley as a Reading room to educate the men of the two villages. The architect was Reginald T Blomfield, who would go on to become President of the R.I.B.A.

Blomfield's other major designs included Lambeth Bridge in London, and the restoration of Chequers, the official residence of the Prime Minister. The Institute is a good example of the Arts and Crafts style popularised by William Morris. The Institute now serves as a facility for events like meetings, dances, and wedding parties.

The village is spread out at the base of Hartest Hill, thought to be the steepest hill in Suffolk. On the edge of the village is Hartest Wood, a 1.21-hectare area of broadleaf woodland planted in 1999, with the layout of the woods representing a map of the village. 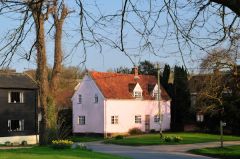 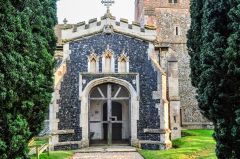 More self catering near Hartest >>

More bed and breakfasts near Hartest >>