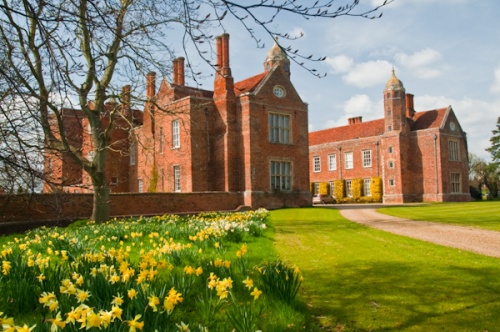 This fine Tudor building is the home of the Hyde Parker family, lords of the manor of Melford, though the house itself is now owned by the National Trust. The manor once belonged to the Abbots of Bury St Edmunds, but after the Dissolution of the Monasteries, it passed to Sir William Cordell, a lawyer who later rose to become speaker of the House of Commons. 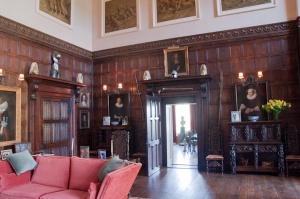 The interior of the Hall

The estate of Melford Hall is entered through a fanciful Victorian gateway, but the exterior of the house itself is pure Tudor, built for Cordell in the period 1554-1578. The house is built of red brick, with three wings partly enclosing a courtyard. The interior, however, shows signs of later remodelling; particularly by Thomas Hopper (1813-1820).

Hopper was responsible for the staircase with classical columns, and the double library, with its fittings of oak inlaid with walnut and yew. Much of the furnishings, including numerous family portraits, relate to the Hyde Parkers, who came to the manor in 1786. Pride of place, however, must go to a map of the estate, dated to 1580.

The banqueting hall is largely unchanged from the days when Elizabeth I was feted here. The library dates largely from the Regency period, and the bedrooms were remodelled in the Victorian era.

Melford Hall contains a good collection of articles associated with author Beatrix Potter, who was related to the Hyde Parker family. Visitors can see a shawled model of Jemima Puddleduck in addition to several of Potter's sketches and watercolour illustrations for her children's stories.

The gardens at Melford Hall are worth a visit; there are some fine varieties of old trees, a banqueting house, and some enjoyable walls through the parkland surrounding the house.

More self catering near Melford Hall