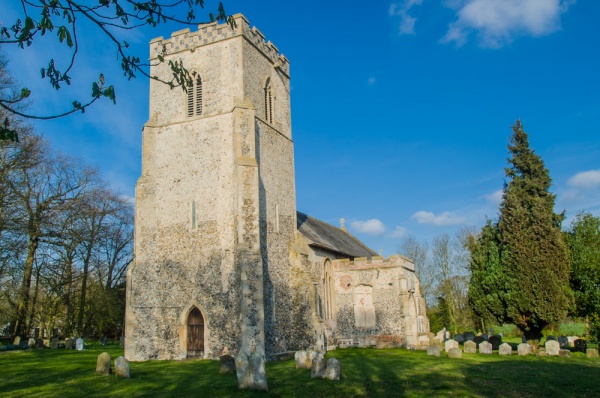 Monk Soham is a pretty rural village about two miles east of Debenham, in north-east Suffolk. The Domesday Book of 1086 mentions a church in Monk Soham, but the present building dates to around 1300.

The 'Monk' in the village name refers to St Edmundsbury Abbey at Bury, give the estate by Alfed, Bishop of East Anglia, in the late 10th century. The village appears to have been used as a rural retreat by the monks.

In the 1630s St Peters was the scene of an unseemly outburst of violence. In an age of religious upheaval, Archbishop Laud attempted to reverse the trend towards Puritanism and tried to reassert the practice of communion at the altar in the chancel.

The lords of the manor at this time were the Wheymond family, staunch Puritans. when the vicar attempted to carry out Laud's directive, the Wheymonds blocked him from approaching the communion rails. Affairs turned very ugly, and there was what amounted to a small riot in the church.

It is hard to imagine anything so untoward happening in St Peter's church today; it seems an oasis of peace and calm. 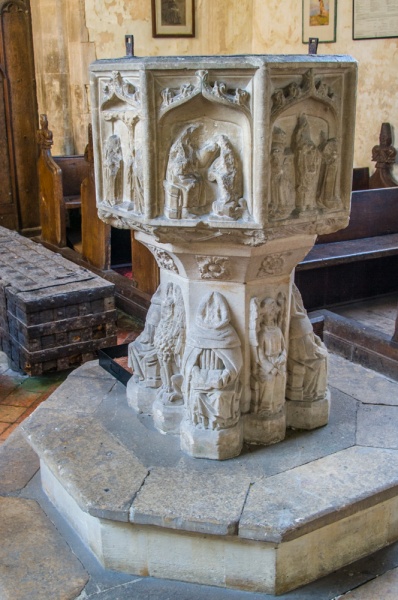 by 1860 the medieval building had fallen into disrepair and was restored under Archdeacon Robert Hindes Groome. Archdeacon Groome served as the rector of Monk Soham for 44 years from 1845 until 1899. In addition to restoring the decrepit medieval building, he planted four yew trees by the churchyard gate. The trees were a gift to Groome from his friend, the poet and author Edward Fitzgerald, famous for his translation of The Rubaiyat of Omar Khayyam.

Historic highlights inside St Peter's include a 14th-century parish chest, bound with iron straps. The chest is over 8 feet long and was originally used to hold the village's important deeds, church plate, and other valuables.

Perhaps the most important historic feature is a 15th-century Seven Sacrament font. It is one of 13 in Suffolk and one of just 40 surviving in the entire UK.

The font stem is carved with figures of the Evangelists dressed as monks, a reminder of the power of the monks of Bury St Edmund in the medieval period. The font carvings have unfortunately been damaged by iconoclasts during the Puritan period, but the carving detail is still quite beautiful. 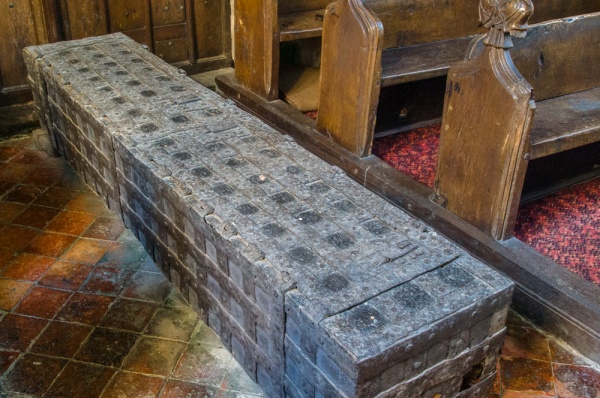 The large east window is said to have been brought here from St Edmundsbury Abbey when the abbey was dissolved by Henry VIII. Set into the south wall of the chancel, near the window, is a canopied piscina. The piscina appears to have had an ornate canopy head, but this has been cut off flush to the wall.

The pulpit dates to 1604, and there are 13 medieval benches with carved poppyhead ends at the west end of the nave.

There are few monuments of note, probably due to the sweeping restoration by archdeacon Groome, but on the wall is a simple plaque to Joseph Bazalguette, a royal navy seaman, who drowned at sea in 1912 at the age of 18.

The tower screen incorporates 14th-century tracery, presumably salvaged from the former rood screen. Under the tower is a solid stone stair to the ringing chamber, an unusual medieval survivor.

St Peter's was open when we visited. 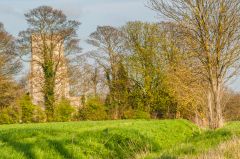 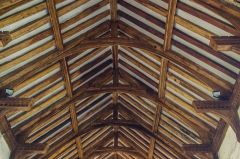 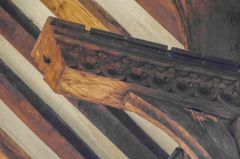