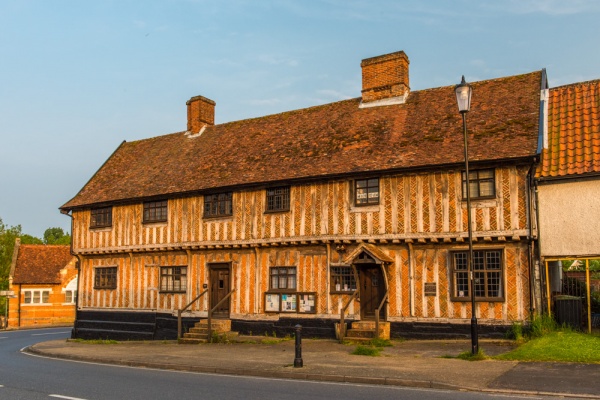 Laxfield is a lovely village in an area of relatively flat land about five miles west of Halesworth. At the time of the Domesday Book in 1086, it had a population of 250, but there is about four times that number now. In 1226 Laxfield received a market charter; the first village in the area to get such an honour.

The wide main street has some fascinating older buildings, most notably the Perpendicular parish church of All Saints and the wonderfully atmospheric Guildhall. All Saints is a very wide building, with a nave spanned by an intriguing scissor-beam roof. The tower is unusual for this area of Suffolk as it is faced almost entirely with stone, rather than flint. Within the church is a superbly carved Seven Sacrament font.

Beside the church is The Royal Oak, a late 15th-century inn. On the inner face of the chimney inside the pub you can see witches marks, carved symbols which were supposed to keep witches away.

Across from the inn and church is the Laxfield Guildhall. This beautiful brick and timber-framed building was erected in 1519 by the Guild of St Mary, a charitable organisation originally based out of the church opposite.

On the upper floor of the Guildhall is a small local museum with exhibits of geology, social history, and village history, including a recreated Victorian kitchen.

Further along High Street, beside the Baptist Church, is a memorial to John Noyes, a shoemaker who was burned at the stake for his Protestant faith in 1557, during the reign of Queen Mary. At the western edge of the village, past the war memorial, is the site of the Mid Suffolk Light Railway station.

The line, known locally as 'Middy', was intended to link the East Suffolk rail station at Halesworth with the Great Eastern line at Haughley. Unfortunately, the funds dried up by the time the line reached Laxfield, and 'Middy' was never finished.

Laxfield is an extremely attractive village, well worth a stop to stroll around and enjoy the historic buildings. 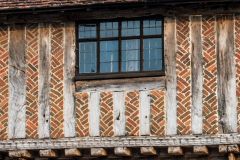 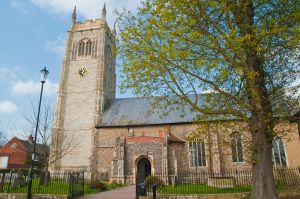 More self catering near Laxfield >>

More bed and breakfasts near Laxfield >>