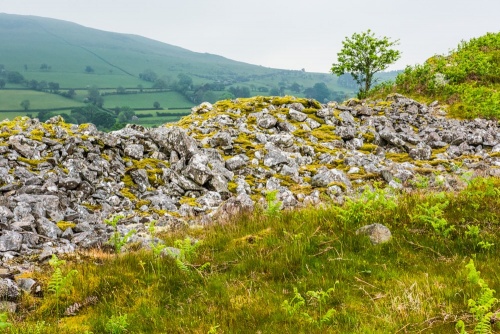 Garn Goch is one of the largest hillforts in Wales, with two camps erected in the Early Bronze Age. The camps were further fortified between AD 47-78 to create a pair of forts sharing a ridge.

The two forts are called Y Gaer Fawr, and Y Gaer Fach (the big fort and the little fort). Together they form the largest Iron Age site in South Wales. Archaeology has revealed that the hilltop was used as early as the Neolithic period, and there are also several Bronze Age burial mounds on the hill. Near the northern rampart is a large cairn or mound of stones which may be a burial cairn and probably predates the fort.

Y Gaer Fawr covers 11.2 hectares and had at least six separate entrances. These are marked by pairs of large upright stones, which may have supported wooden gates, controlling access into and out of the fort. In the centre of the enclosure is a boggy area, perhaps all that remains of a pond or pool that supplied water to the inhabitants. You can also see a levelled area which must have been used as a base for a hut.

The fort is situated on the boundary of the lands of the rival Silures and Dematae tribes. The Silures resisted the Roman advance, while the Demetae may have cooperated with the invaders to strike at the Silures.

Legend has it that Caradog, known as Caractacus to the Romans, one of the leaders of the native British resistance to the invaders, allied with the Silures and used Gaer Goch in his battles with the Romans. It appears that the fort was strengthened to meet the Roman threat, but if so, the new defences did not hold off the Romans for long. 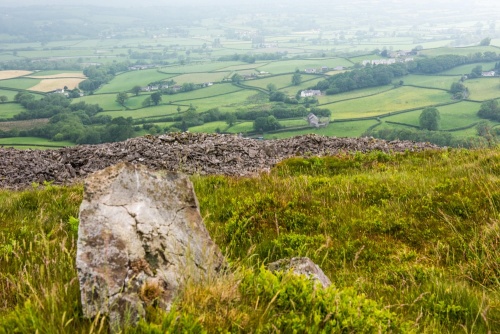 Garn Goch is more than a pair of forts; it was a major settlement in the Iron Age and would have been a bustling centre of activity, with trade and agriculture taking place. Several hundred people lived at Y Gaer Fawr, which was defended by a stone rampart standing over 30 feet high and 15 feet thick, following the contour of the hill.

Much of the rampart is a simple rubble bank today, giving little idea of how impressive it must have looked like in its heyday. The site atop a ridge provided panoramic views that made it impossible for attackers to approach without being seen.

Garn Goch is common land, so is open to walkers. A public footpath runs directly through the site, and the long-distance Beacons Way begins at nearby Bethlehem village and runs close to the forts. There is a small car park at the foot of the hill, signposted from the village, and the path leads past a standing stone - not an ancient one, but a memorial to the first Plaid MP, Gwynfor Evans.

From the parking area, it takes roughly 15 minutes to reach Y Gaer Fach, the first and smallest fort, and another 15 minutes to reach the furthest extent of the second fort, Y Gaer Fawr. The going is steep at first, and though the route is not marked it is fairly easy to follow the well-trodden trail.

The route skirts the northern edge of Y Gaer Fach, and you get good views over the valley below. The trail dips into a hollow before rising again to the ramparts of Y Gaer Fawr. You can climb over the stone bank directly ahead of you or follow the trail to the south-western corner of the fort to a large entrance.

Once inside the fort the trail theoretically makes a loop inside the ramparts, though in practice the trail was indistinct in places and I found myself continually losing the path and finding it again. What is really striking about Y Gaer Fawr is how big the area of the fort is; you can't even see one end from the other.

Visit the hillfort in autumn to fully appreciate its name (Garn Goch means 'Red Hill'). There are splendid views of the Towy valley and further to the Black Mountains. 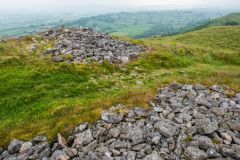 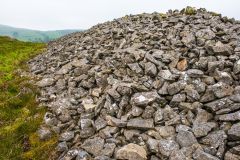 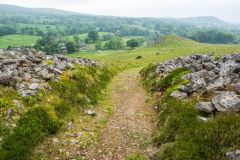