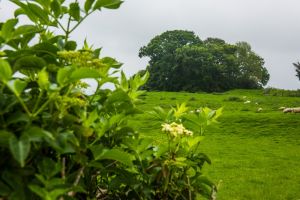 Llangadog Castle (Castell Meurig)
Castell Meurig is a Norman motte and bailey with earthwork defences. There is little visible of the fortifications beyond the castle mound.

Castell Meurig was originally thought to be a simple motte and bailey structure erected by Gilbert de Clare, the powerful Lord of Cardigan, or perhaps his son, the 1st Earl of Pembroke. However, recent investigation of the site suggests that the kings and princes of Ceredigion had a royal hall or llys at Llangadog from the 6th to the 9th century. Some of the castle earthworks are thought to belong to the llys enclosure.

We do not know exactly when the castle was built, but it must have been prior to 1203, when it was besieged during the English/Welsh conflict of the early 13th century. There were further attacks on Llangadog in 1208 and 1209.

Local tradition suggests that the farmhouse known as Glansawdde was built using stone scavenged from the castle ruins.

There is no direct access to the castle, and indeed no easy place to park. We parked in the centre of Llangadog and simply walked south along the A4069 until we came to a farm fence with a gate giving a direct view across the field to the castle site. You can clearly see the remains of earthworks, and the eroded castle mound, now partially obscured by trees. A modern house now stands within the earthworks.

About Llangadog Castle (Castell Meurig)
Address: Llangadog, Carmarthenshire, Wales
Attraction Type: Castle
Location: Off the A4069. May be viewed from the nearby road or footpath.
Location map
OS: SN707 282
Photo Credit: David Ross and Britain Express