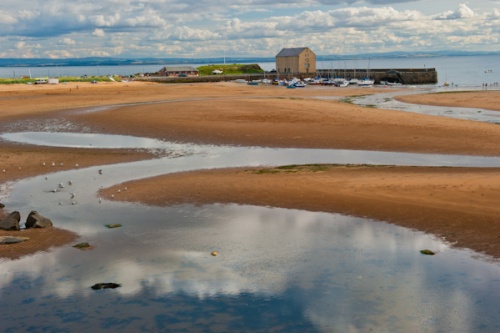 The beach at Elie

The twin towns of Elie and Earlsferry merge together to create a larger community along the shore of Ruby Bay, one of the widest and prettiest stretches of coastline in Fife. While most fishing villages on the East Neuk coast have fairly compact harbours, Elie harbour stretches out in both directions.

Elie was a Burgh of Barony as early as 1589, but in 1929 it was joined with Earlsferry. The name Earlsferry tells its own tale. It seems that the 11th century Earl of Fife, MacDuff (he of Shakespeare fame), hid from his enemies in a cave near Kincraig Point. Local fishermen then ferried him across the Firth of Forth to Dunbar when it was safe, thus giving the village a perfectly apt name of Earlsferry.

The ruins of an 11th-century chapel can be found atop the point. It is thought that the chapel may have been founded by MacDuff in thanks for his deliverance. Though only a restored end wall and a section of side wall remain, the location provides wonderful views along the coast.

You can look across Ruby Bay to a string white and green painted lighthouse on the eastern headland. A path leads from a parking area near the headland to the lighthouse and along the cliffs to Lady Tower, a stone structure built by Lady Janet Anstruther of Elie House. Lady Tower was used by Lady Anstruther as a summer house. She was a character, and not always a sympathetic one.

Lady Janet loved to bathe in the sea, but she also loved her privacy. Whenever she felt inclined to bathe, she sent a man through the streets of Elie to ring a bell, warning the townsfolk to keep away. She also levelled the village of Balclevie because it ruined her view. 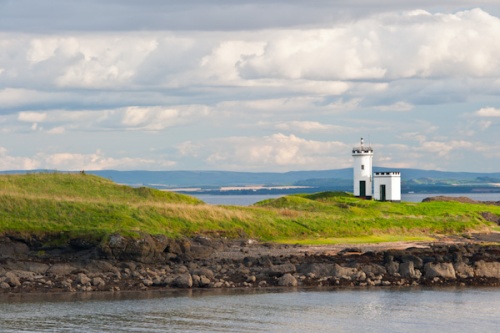 In the centre of Elie is the parish church, set within a stone boundary wall. The church is a very attractive building with a striking central tower. It was constructed on the orders of Sir William Scott of Ardross Castle in 1639, and the octagonal clock tower was added in 1726 by Sir John Anstruther.

At the western edge of Earlsferry is a links golf course. An old trackway called Cadgers Road crosses the links. This was named for the cadgers (carriers) who transported fresh fish from the harbour to the Royal Palace of Falkland.

The most intriguing historic features of Elie and Earlsferry can be found on the headlands at each end of the bay, and about halfway in between! On the eastern headland of Chapel Ness is the ruined chapel attributed to Earl MacDuff.

In truth, there's not a lot of the chapel to see, but the location is superb. On the opposite, eastern headland of Elie Ness stands a photogenic lighthouse, and around the headland is the Lady Tower.

The entire Elie Ness headland is a nature reserve, with easy footpaths leading along the cliffs from a parking area off Wadeslea. The halfway point (roughly) is Elie church, which is really quite pretty with its unusual tower. 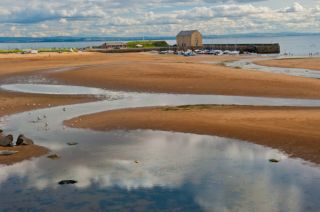 More self catering near Elie >>

More bed and breakfasts near Elie >>