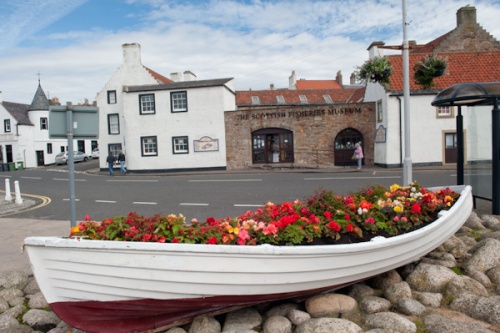 A colourful boat at Anstruther quay

The Royal Burgh of Anstruther was created in 1587 and combines the neighbouring communities of Easter Anstruther, Wester Anstruther, and Cellardyke. The focus of the community is the parish church of St Adrian, built in 1634.

Near the church, in Back Dykes, is the Old Manse, built by James Melville in 1590. Melville wrote a series of diaries which give a fascinating glimpse into life in medieval Scotland. Near the town hall of Easter Anstruther is gabled Buckie House, notable for its decoration of scalloped shells and buckies.

Anstruther's history as a centre of the herring fishery is remembered at the Scottish Fishing Museum, located at the east end of the harbour at St Ayles Land. This is one of the oldest properties to survive in any Scottish burgh and dates to 1318.

On the east side of the property is a 16th-century lodging built for monks from Balmerino Abbey who travelled here to buy fish. The museum is a former winner of the Museum of the Year award. Within the museum are a collection of historic boats, a restored wheelhouse, a fishmonger's shop, and a large collection of historic photographs. 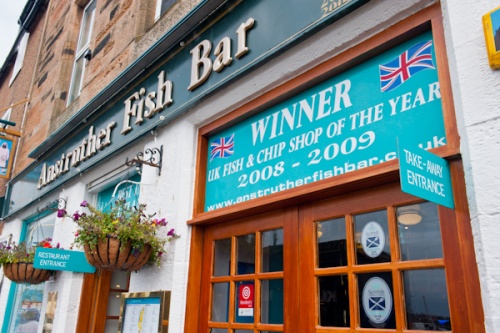 Famous natives of Anstruther include Dr Thomas Chalmers, the first Moderator of the Assembly of the Free Church in Scotland, whose birthplace is marked by a plaque on the High Street. Another native was Lieutenant Andrew Waid, who left money to establish the Waid Academy for local education.

Regular boat trips leave Anstruther harbour for the Isle of May, one of the best places in Scotland for viewing seabirds.

The harbourside area is lovely, one of the prettiest on the East Neuk. Towards the western end of the harbour is the medieval mercat cross of Anstruther Easter, much worn by the passage of time. Still further west, where Wightman's Wynd turns north to join High Street, is a section of wall that is all that remains of Dreel Castle, built by Sir William Anstruther.

Though these historic buildings help add to the general ambience of Anstruther, two buildings in particular draw visitors. The first is obvious - its the Scottish Fisheries Museum, housed in a historic set of buildings around a courtyard. However, probably the most popular visitor destination is the Anstruther Fish Bar on East Shore street, a serial winner of the Best Chip Shop in Scotland award.

A chap we met later in our trip to Fife told us that there used to be regular tour coaches from Edinburgh to the East Neuk of Fife, and one of the trip highlights was the Anstruther Fish Bar, where apparently the line of people waiting to order can stretch down the street and around the corner during busy periods.

We intended to order chips from the famous shop but it was so busy (and we were so hungry) that we decided not to wait, and instead ordered from another chip shop along the harbour front - which was also an award-winning chippie! 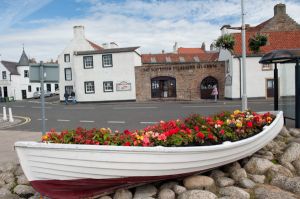 More self catering near Anstruther >>

More bed and breakfasts near Anstruther >>

This spacious and detached cottage rests in Anstruther, Scotland and can sleep eight people in four bedrooms.
Sleeps 8

This charming, semi-detached, ground floor cottage is set in the hamlet of Kilrenny, just one mile from Anstruther, on the beautiful East Neuk of Fife and can sleep three people …
Sleeps 3