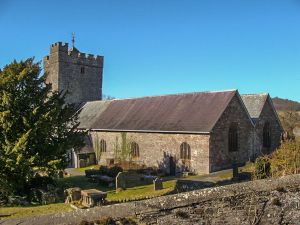 Defynnog, St Cynog Church
St Cynog's is built on the site of a Celtic church, and part of the north wall, a window and font still survive. The remainder of the church dates from the late 15th century.

Though most of the attractive building we see today is 15th century, the origins of St Cynog's go back to at least the Norman period if not earlier. There is 11th century stonework in the north vestry wall, and the font and holy water stoup may be 11th century or possibly even pre-Norman. The richly carved font is inscribed with Runic letters, the only example in Wales of a Runic inscription.

Defynnog church is famous for a pre-Norman 'Celtic window'; though recent studies conclude there is no way to tell just how old the window actually is.

One remarkable treasure at St Cynog's is a 5th century Roman tombstone, in the shape of a pillar. On one vertical face is a Latin inscription reading 'RUGNIATIO LIVENDONIO', or 'Rugniatis, son of Vendonius'. Also carved onto the stone's side is worn Ogham script. At the top is a carving of a Celtic ring-cross, added some time between the 7th-9th centuries. The stone is now in the porch, but was discovered set into the tower wall, upside down.

One remarkable historic feature at St Cynog's has nothing to do with the church itself; it is a yew in the churchyard. Dendrochronology and DNA analysis has suggested the yew may be as much as 5000 years old. It is roughly 60 feet across and has split into two distinct parts. It appears to have been planted on the slope of an ancient burial mound. If the dating is correct, the Defynnog yew is the oldest living tree in the UK and probably the oldest in all of Europe.

There are several good 17th century memorials, including one to Jeffrey Williams (d. 1637).