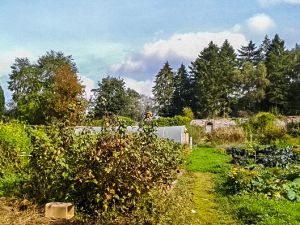 The walled garden at Ffrwdgrech
The 8 bedroom Regency house of Ffrwdgrech stands in 355 acres of gardens, parkland, and woodlands, with a Grade II listed Victorian pleasure garden complete with waterfalls and streams.

There has been a house on this site since 1560 but the present Ffrwdgrech dates to the 1830s. The house was designed by architect Robert Lurger to take advantage of excellent views toward the Brecon Beacons.

The real highlight of Ffrwdgrech is not the attractive house, however, but the well-preserved Victorian pleasure garden in which it stands. The garden is set in a landscape of lawns and trees, waterfalls and streams. The water features seem especially appropriate as the English translation of Ffrwdgrech is 'rippling stream'.

Robert Lugar was a native of Essex, but most of his architectural work was done in Wales and Scotland. During the Regency period he found himself in great demand, designing country houses for wealthy industrialists. In 1828 the Church Pearce family called Lugar in to build a new mansion in elegant Regency style.

The result is an exact duplicate of the rectory at Yaxham in Norfolk, which was built at the same time. The family also planted a wonderful array of specimen trees, including ash, beech, and horse chestnut, which are one of the garden's most beautiful attractions.

In the 1880s a successful banker named David Evans, who ran the Wilkins & Co private bank, purchased Ffrwdgrech. The bank was then purchased by Lloyds in 1890, but Evans was already at work enlarging the house at Ffrwdgrech and laying out the superb gardens.

He embarked on a major programme of tree planting, augmenting the earlier specimen trees with Japanese maples, Austrian pines, Douglas firs, silver firs, and California Redwoods. To the south of the house he laid out an area of open lawn and a pond, and to the north and east a woodland valley planted for ornamental effect. The woodland was created with winding walks providing picturesque glimpses of the distant mountains.

In the early 20th century the garden was extended again, with exotic plants brought back from abroad by Jack Evans, at 18 already an avid plant-hunter and collector. Evans was responsible for the lush displays of azaleas and rhododendrons, plus a large number of other more unusual species. Jack Evans was a passionate horticulturist and eventually became head of the Royal Forestry Society.

The garden is usually open as part of the National Garden Scheme, or by appointment. The Taff Way long distance path goes right past the entrance to the property, which is just south west of Brecon of Ffrwdgrech Road.

More self catering near Ffrwdgrech Garden >>