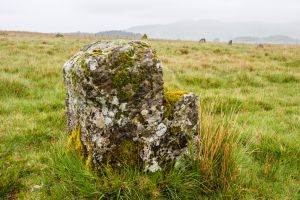 Trecastle Mountain is one of the many prehistoric remains surrounding Brecks. There are two circles of small stones here, the larger measuring 74 feet in diameter. A small mound in the centre of the larger ring may indicate a burial.

The large circle is made up of over 20 visible stones, though there may have been more originally. All the stones are small, no more than 0.6 metres high.

The smaller circle, about 95 metres away, has only 5 stones remaining, standing up to 1 metre high. The entire circle is only about 8 metres across. Bronze age urns were discovered during excavations at burial mounds here.

The circles are very close to a pair of small Roman forts, or marching camps, and the course of a Roman road runs beside the site. A stone row and stone pillar are close by.

From Trecastle take the minor road beside the antique centre and bear right at the first fork. Carry on until the public road ends at a cattle grid. There is a useful information panel with a map of the historic sites, including the Roman camps. The road, really a farm track at this point, follows the route of an old Roman road.

The road strikes almost due west across barren moorland, before rising towards the summit of Y Pigwyn. Leave the track and head towards the field boundary on the edge of the moorland. You'll come to the largest circle atop a low rise.

Don't stay on the track/Roman road as neither circle is visible from it. A good OS map will be essential! Even though I had an OS map with me, I ended up blundering about on the featureless moorland looking for some vague clue to the circle location. Eventually I spied a white stone near the field boundary and was able to reach the stone circles. The moorland can be wet, especially after rain, so good waterproof footwear is a must.

It is fascinating to see the two circles so close together, and to see the contrast between the small circle with large stones and the much larger circle with much smaller stones. The large circle is really quite impressive, even though many of the stones have fallen and others are quite small. 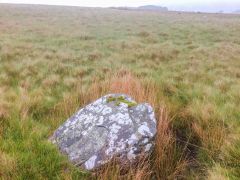 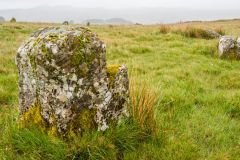 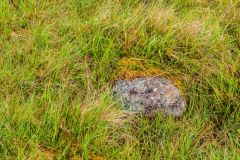