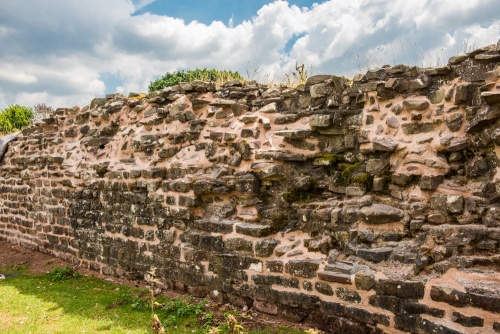 Brecon Gaer, also known as Y Gaer, is an early Roman fort, begun about 75 AD near the River Usk. The perimeter wall with corner turrets is still preserved, and the gateways still show the holes where the gate-pivots hung. Finds from Brecon Gaer can be viewed at the Brecknock Museum in Brecon.

The first fort at Y Gaer was a simple affair, protected by banks made of clay, topped by a wooden palisade. Inside the enclosure was a stable building and quarters for auxiliary troops of the Vettonian cavalry from Spain. In the late 2nd century the fort was rebuilt in stone by the Second Augustan Legion and repaired in the 4th century. Outside the wall was a ditch 1 metre deep and nearly 9 metres across.

The fort layout is a rectangle with an entrance in the centre of each side and a turret at each corner. The interior of the fort was been excavated, and the major buildings exposed. The most impressive building discovered by archaeologists was a Principia, the legion headquarters, with a small shrine and a storage place for the legion's eagle standards, and an underground chamber for valuable items - such as pay coffers! Nearby stood the Preatorium, where the camp commander lived. 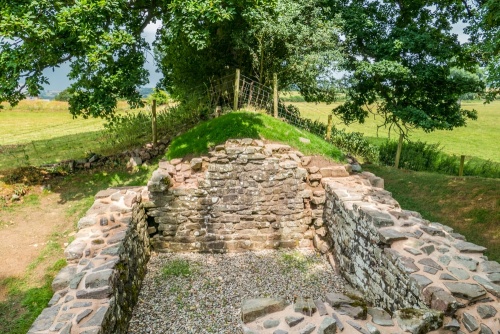 Near the Principia was a granary, and there was a bathhouse in the north-west corner, with 4 hot and warm rooms, several unheated chambers, and a cold plunge bath. East of the Principium were the barracks.

Outside the fort was a civilian settlement, or vicus, with workshops, and a mansio; an imposing official residence used by both the Imperial Post and by visiting officials. All of these structures were covered up after excavations were complete.

Several carved gravestones have been found near the fort. One commemorates a cavalryman named Candidus, one is a memorial to Valerius Primus, and the third shows a couple, carved life-sized.

Getting to Brecon Gaer is not simple, as the site is not signposted from the surrounding roads. From Brecon take the road to Cradoc, then turn left to Aberyscir, and left once more at the first crossing. The road ends in a farmyard and you might think you've taken the wrong route, as thee are no obvious signs. This is private land, so please park with care and consideration.

You will see a gate beside a building on your left, leading to a small field. At the far side of the field is the north wall of the Roman fort. You can go through a farm gate on the right of the highest section of wall and you will find yourself inside the fort. 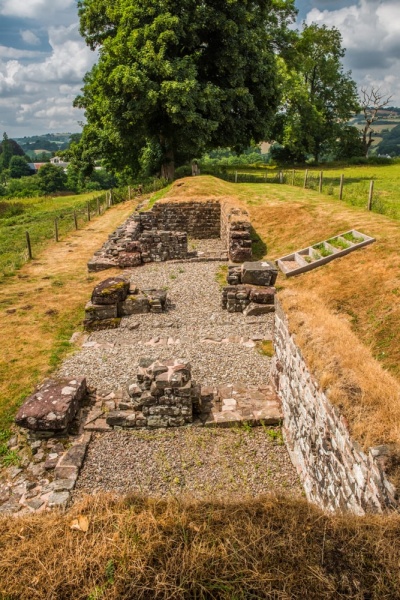 The fort interior is not very impressive; it is essentially just a large, open field, but several sections of Roman wall and gateways around the fort perimeter have been restored, and these are well worth seeing.

There is a small gateway and a guardhouse in the east wall, and a much larger gateway with flanking chambers on the west side, but the most impressive feature is the large gateway in the south wall. This also has flanking guardhouses, and the central passage is divided into two sections, with a central section for carts and outer passages for pedestrians.

The gateway is so wide that the gate was divided in two. You can clearly see rounded holes on both sides of the gate where a post supported a wooden gate that pivoted on an upright pole. 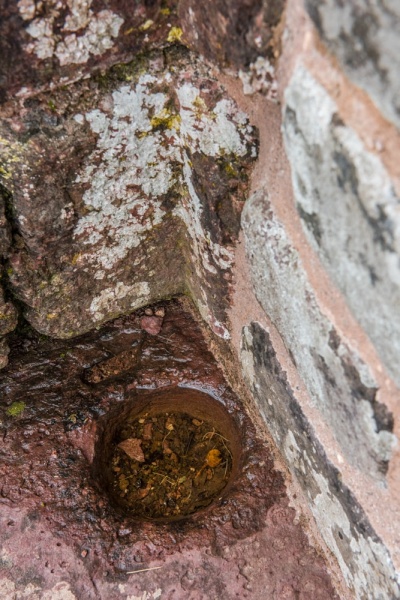 And then there is the north wall; the first part of the fort that you come to. This is very impressive, and still stands to well over head height. when we visited we met a mason who was working on top of the wall, carefully repointing the masonry.

He told us that the wall had originally been repaired in the 1950s but the workmen used ordinary cement mortar, which actually helped seal water inside the wall and caused rapid deterioration of the Roman stonework. Thankfully more recent advances in archaeology mean that restoration work done today will help preserve the Roman work with causing further damage.

Unfortunately, there are no information panels at Brecon Gaer to help interpret the site or to show what it might have looked like when it was built. The restored gateways are very impressive but the site could definitely benefit from some visitor information. 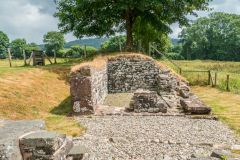 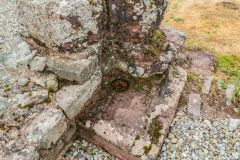 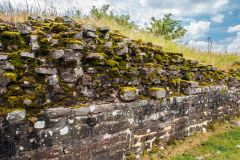 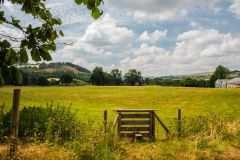 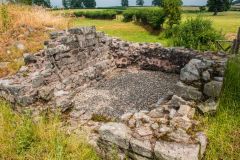 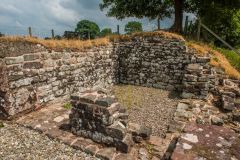 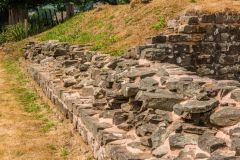 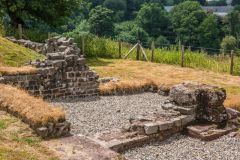