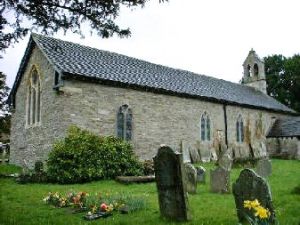 Llanspyddid, St Cattwg Church
St Cattwg is an attractive rural church of 14th century, with a late Norman stoup and 13th century font. In the churchyard is a pillar stone dated from the 7th-9th century.
History
St Cattwg's church was probably established in the early medieval period, as evidenced by the standing stone in the churchyard. It is possible it was directly connected to Cattwg, also known as Cadoc, who was born in 497 AD and served as Abbot of Llancarfan, near Cowbridge. Cattwg is known to have founded many churches in Dyfed, so it is possible he founded a church here at Llanspyddid.

We know that a church was recorded in 1291 but it seems that most of the present building dates to the 14th century. Inside the church the oldest feature is the 13th century font, and a holy water stoup of roughly the same date.

In the north west corner are a large number of 18th century mural monuments, and there are more 18th century grave slabs on the west wall of the nave. Most of the fittings are Victorian, part of a major 1880 rebuilding which seems to have swept away much of the original medieval church.

The porch gable is decorated with 16th century barge boards, with detailed carving. A large number of old gravestones have been leaned up against the wall of the church.

Aulach's Stone
In the churchyard is a Celtic incised cross, dating to the 7th century. The stone is carved with two ring-crosses, one above the other, and the top cross has four small circles arranged around it. The stone is roughly 3 feet high but according to historical records may have originally been twice that height but was cut down during the comprehensive restoration of the church in 1880. It is said to commemorate the burial place of Aulach, father of King Brychan, the 5th century founder of the kingdom of Brecknock.

Alternatively, the stone has been claimed to mark the burial place of Brychan himself, though this seems a little unlikely. Brychan is said to have fathered between 40-50 children from 2 marriages, and every one of his children became a saint.