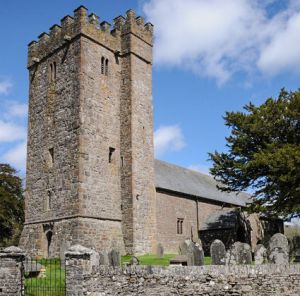 Llywel, St David's Church
St David's is a 15th century church with its origins in the 5th century, boasting a pre-Norman font, 18th century stocks, and a pair of ancient Ogham stones.
History
The first church at Llywel was founded by St Llywel in the 5th century. Curiously, that first church was not dedicated to Llywel himself, but to a trio of three saints, David, Padarn, and Teilo. In the 13th century the Bishops of Llandaff and St David's engaged in a power struggle, and the Bishop of St David's claimed Llywel. The three-part dedication was dropped and from that time the church was simply known as St David's.

The nave and chancel date to around 1480, but the tower is slightly earlier. Though the body of the church was restored by Sir George Gilbert Scott in 1869, what we see is almost entirely a product of the 15th century and earlier.

Highlights include a 15th century south door, a pre-Norman font, a Tudor carved screen, a Tudor tomb recess in the south wall, and under the tower are the old village stocks, unusually brought inside the church for preservation. The stocks were made in 1798 to replace a whipping post made in 1771.

On the south wall of the nave is a fascinating, crude tablet commemorating Sybil Morgan, who died in 1600. Curiously, several local historians have concluded that the date is out by almost 9 decades, insisting that Sybil Morgan died in 1687.

Even more interesting are a pair of carved stones, or stone pillars. The Aberhydfer Stone is a 5th century stone incised with Ogham script. It was discovered by chance in 1954 when the church canon went for a walk and found the stone set into a wall blocking an unused track beside the Usk. The stone was brought within the church for safekeeping.

The Llywel Stone
Even better known is this 4th-5th century stone, found at Pentre Poeth Farm, carved with human figures and Celtic symbols on one face, and a Latin inscription on the other. The inscription translates as 'The stone of Maqutrenus Salicidunus'. The edges of the stone bear Ogham script marks. The original Llywel Stone is in the British Museum; what we see inside the church is an plaster cast.