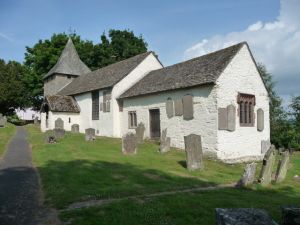 St Bilo's church is dedicated to a local saint named Bilo, or Beilo, daughter of Brychan. The dedication was recorded as early as the 13th century, but curiously, the church was known for many years as St Milburga's, after the daughter of a 7th century Mercian king and abbess of Wenlock. There must have been a Norman church here, for a reused lintel shows Norman carving motifs, but the building is almost entirely 14th century and later.

The chancel was rebuilt in 1710, and in the 19th century the west end of the church was blocked off and used as a schoolroom. In the south wall is a small window in Early English style, possibly a hermit, or leper window, and in the north wall is a blocked priest's door topped with a lintel carved with a traditional Norman diamond motif, suggesting an 11th-12th century date.

The most interesting historic feature is a very nicely carved late 15th century rood screen, which retains its loft. Also worth noting is the barrel-vaulted nave roof, which is probably 15th century, made of 54 individual ribbed panels. In the chancel are memorials to the Vaughan family, the earliest of which dates to 1624. In the chancel is a small bell, cast in Worcester around 1410, which hung in the bellcote until the bell cracked.

One other feature is worth mentioning, as it is easy to miss; the lych gate is one of the oldest in Wales, and is thought to have been erected around 1700.