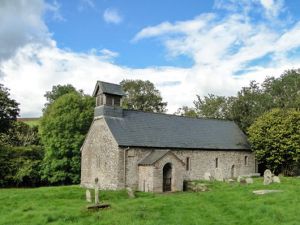 Llanelieu, St Ellyw Church
St Ellyw is a redundant 13th century church in a remote location on the fringes of the Black Mountains, in the Brecon Beacons. The church boasts a 14th century rood screen and loft, medieval wall paintings, and 7th-9th century pillar stones.
History
The Clwyd Powys Archaeological Trust puts it rather bluntly when it says, 'nothing is known of the early history of Llandeilo church'. We do know that the church was built in the 13th century, and extensively rebuilt in the 15th century. It forms a single cell, with a south porch at the west end, and a blocked medieval door in the south wall. There is also a 13th century priest's door at the east end of the south wall. The tower is 14th century, slightly later than the nave.

The most impressive historic feature is an exceptionally large 14th century rood screen, retaining its loft. The screen loft is painted a startling blood-red colour, stencilled with white roses, and the loft panelling is pierced with small quatrefoil openings to give a view of the altar.

The walls are plastered, and decorated with a range of wall paintings. Some are medieval, and some date to the 16th-17th centuries. The medieval paintings include a scene of Adam and Eve flanking a tree, and a variety of floral patterns. Post-Reformation paintings include Biblical texts, a royal coat of arms showing the lion rampant, and the Ten Commandments.

There is an octagonal 14th century font with a Baroque style 17th century cover, an 18th century pulpit, and a pair of 17th century oak pews. In the sanctuary is a double piscina, somewhat unusually set into the east wall, along with an aumbry and 17th century tomb slabs used as paving. Among the oldest is a 1645 memorial to Richard Awbrey of Llan Ellyw. There are 2 bells; the northern bell is 12th century, while the southern bell dates to the 14th century.

Leaning against the external wall of the porch are a pair of ancient pillar stones, dated from the 7th-9th century. Though worn and covered with lichen, you can clearly make out a Celtic wheel cross on each stone. Also on the church exterior is a stone sundial, made in 1686, set high on the south wall.

Who was St Ellyw?
Ellyw was said to be a daughter, or granddaughter, of Brychan Brycheiniog, who lived in the mid-5th century. According to legend she rejected a suitor, and in a fit of rage he cut off her head, which rolled downhill. A spring burst forth from the place where the head stopped. The same, or similar stories are told in many places around Wales.

St Ellyw's church was included in Ted Hughes' popular book, 'Wales's Best One Hundred Churches'. The church is redundant and has been under the care of the Friends of Friendless Churches since 1999. It is used regularly by local people for concerts and as a meeting space, and is often used for performances during the Talgarth Festival.