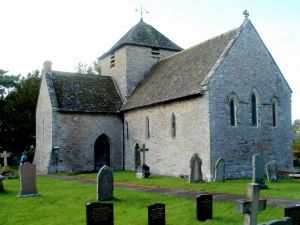 Llanddew, St David
Built on the site of a Celtic Christian community, the 12th century cruciform church contains 13th century lancet windows and transepts and a 17th century tower. The church was restored in the early 20th century.

St David's is thought to be the oldest church in the historic county of Brecknockshire and stands on a monastic site known as a clas, so it would originally have been surrounded by quarters for monks, who went out into the community to preach.

There is an ancient tradition that St Eluned, daughter of Brychan, fled here to escape from an unwanted suitor around 500 AD. She lived a pious life until the rejected suitor found her and cut off her head. The saint's head rolled down a hill until it stopped beside a yew tree. A holy well rose on the spot, and became an site of pilgrimage. The well still exists, protected by a stone wellhead.

The church was heavily rebuilt in the 17th and 19th centuries, but still has its medieval font, a pair of holy water stoups, and an intriguing stone carved with a ring cross, which may date to before the Norman Conquest. The oldest part of the structure itself is the 13th century south wall of the nave, and most of the north transept is the same age.

The tower was rebuilt in 1629, and a plaque commemorating the event is set in the chancel's west wall. It reads, 'This steeple was newly erected and made in Apriel Anno Dom. 1629. William Havard and William Griffith Gent then churchwardens'. Coats of arms to the worthy pair of churchwardens are set into the wall nearby; clearly they wanted everyone to know about their good works!

According to an account in 1865 the south transept was walled off to serve as a school, but lack of funds meant the school was not in operation. The north transept was unpaved, and only the nave was used for services.

During the medieval period the powerful Bishops of St David's held the manor, and built a mansion, or palace here. The 12h century monk and writer Geraldus Cambrensis resided at Llanddew Palace.