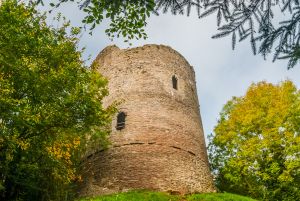 Bronllys Castle is a mid-12th century stone keep perched atop an earlier motte overlooking the River Llynfi. Remains of the surrounding baileys are scant, and there is no remaining trace of any buildings within the walls apart from the round keep, which still towers 80 feet above the motte.

Richard FitzPons, or his son, Walter, erected the motte around AD 1100. The FitzPons family were followers of the Norman lord Bernard de Neufmarche, who established control over much of this area.

Walter FitzPons changed his name to Clifford, and it was left to his grandson, Walter Clifford III, to build the solid stone keep to replace the earlier wooden structure at Bronllys.

This Walter Clifford was married to Margaret, the daughter of Llewelyn the Great. Henry III briefly took control of Bronllys in 1233, and used it to conduct negotiations with Llewelyn.

It was later in the control of the Bohun family, but by the late 14th century it was already in a state of decay and played no real part in historical events after that.

Its not the easiest thing in the world to find Bronllys Castle; the site is screened by tall trees and bushes, and the signposting is a bit scanty. There's no car park, but there is a layby on the opposite side of the road further up the hill. A short path leads from the road to the castle mound.

Only the motte and tower can be visited; the surrounding baileys are on private property. 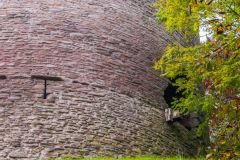 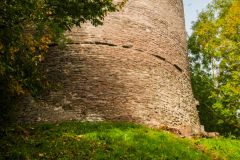 More self catering near Bronllys Castle >>