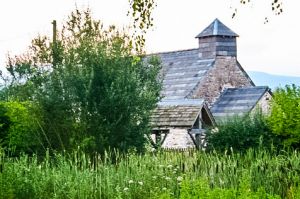 Llanywern, St Mary Church
St Mary's is a small, isolated 14th century church set in beautiful countryside, with views to the Black Mountains. The most interesting historical feature is a 13th century font.
History
The first church at Llanywern is said to have been built in the 6th century, and was dedicated to St Cynidr, but there is no apparent archaeological evidence to support (or refute) this. The oval churchyard does suggest an ancient origin, however.

The first written record dates to around 1100, when it was called Landwern altera, which can be variously translated as 'the place where alder trees grow' or 'church near a bog or marsh'. The current dedication to St Mary dates from this early 12th century period. In the 14th century Llanywern may have been a chapel of ease for Brecon Priory.

The church is a single-celled 14th century building, with minor rebuilding in the 17th century. The interior is lit by oil lamps and has its original flagstone floor. There are several 18th century memorials, and the windows are probably 17th century, with the porch added at around the same time.

The simple stone font consists of a plain bowl on a short stem, and is thought to be 13th century. The chancel ceiling is late medieval, and you can still make out traces of medieval paint on the beams over the space where the rood would have stood. Behind the altar is panelled wainscotting dated 1657, with a flower motif.

To the south of the church is an earthwork that may be remnants of a medieval settlement.