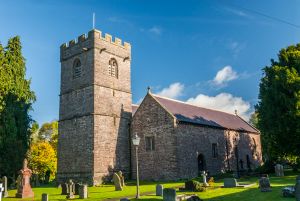 St Paulinus' dates to the 15th century and features a barrel roof, and early Tudor doors and windows, and a 13th century font. Despite a major mid 19th century refurbishment the church has retained many of its medieval features.
History
The first record of a church in Llangors comes from 1152, and its early medieval roots are revealed in its curved churchyard and location beside a stream, both common in early medieval foundations in Wales. There is a possibility that a Celtic monastery existed here from the 7th century to the Norman period, but there is no way to know exactly where the monastery stood. It seems to have been dedicated to St Mary and St Paulinus until the Reformation, but since then only the second dedication has remained.

The current church dates almost entirely to the 15th-16th centuries, with a major rebuilding in 1874. When the medieval chancel arch was dismantled an ancient carved stone was discovered. The church has a 'weeping chancel', that is, it is off-centre from the nave, a common reference to the fact that Christ's head leaned to one side on the cross.

In the south aisle several 17th century grave slabs have been used to create the flagged floor. The roof of this aisle is a very good example of late 15th century barrel-vaulting, or 'wagon-roof' construction.

The simple octagonal font is 13th century, and the ornate organ with its gilded cherubs dates to 1764. It was made by John Byfield II, a prominent late 18th century organ maker, and came to Llangors in 1894 from St John's church in Cardiff. It is considered an important example of a Byfield organ, and when see the quality of the woodwork you can see why! 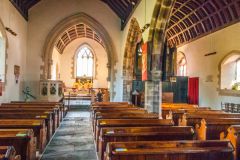 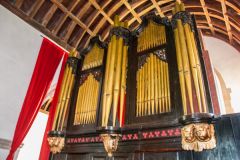