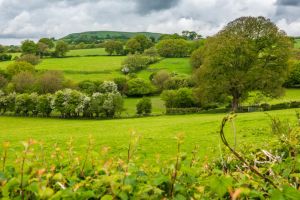 Llandovery Roman Fort (Alabum)
A medieval church stands in one corner of a 1st century Roman earthwork fort, and the route of the Roman road heading north towards Pumsaint is clearly visible.

The old Welsh name for Llandovery tells a lot about the history of this area during the Roman occupation. The name was Tre Coch, which translates as 'Red City', a reference to the large number of red Roman tiles found in the area.

Around 70 AD an auxiliary fort was built atop Llanfair Hill, as part of the first Roman push into south Wales. The fort lies at a junction of Roman roads, linking Carmarthen, Brecon Gaer, and the Dolaucothi gold mines near Pumsaint.

The fort covered an area of 5.25 acres, and was defended by a double-ditch and clay rampart. The land to the north-east was relatively flat, so the Romans added another two ditches on that side. The defences were later strengthened with a stone revetment wall.

The site plan is rectangular, with major entrances on the short sides. It measures roughly 582 feet long and 391 feet wide.

Between the fort and the River Bran a military bathhouse was built. The fort remained in use until about 130 AD, and during that time a vicus, or civilian settlement, grew up outside the fort. 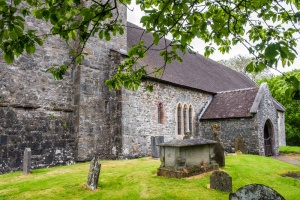 The church stands within the fort

The site was later reused by the Normans some 1000 years later. The stone church of St Mary was built within the fort's earthworks, and pieces of Roman tiles can be seen embedded in the church walls.

Traces of the earthworks can be seen surrounding the church and you can clearly see the route of the road to Pumsaint and the gold mines at Dolaucothi. The road runs along the A483 for 50 metres, then branches east, running straight until it rejoins the A483 about 400 metres further on.

The best-preserved section of the earthworks are the western section, with its obvious scarped banks, which has been declared a Scheduled Ancient Monument. See the earthworks to the north and west of the church.

An 18th century vicar of St Mary's church reported finding Roman lamps, sherds of pottery, an altar stone, and coins from the reign of Constantine. A century later another vicar found a piece of inscribed Samian ware pottery, a coin from the reign of Claudius, and another from the time of the Roman republic.

There are no signposts or any interpretation panels, so you really have to use your imagination to make out the contours of the fort. I found an OS map extremely useful for figuring our exactly where the fort lay in relation to the church and the fields below the road.