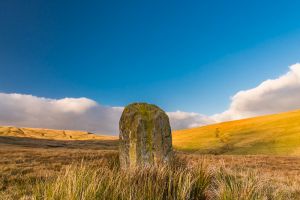 CADW describes the Cerrig Duon site as a a 'ritual complex'. There is a small oval of standing stones (Cerrig Duon) with 2 long stone rows, and about 30 feet away is a tall standing stone (Maem Mawr) with two small stones aligned in a row.

The stone 'circle' is really an ovoid, or egg-shaped, arrangement of stones measuring about 60 feet. There are roughly 20 small stones in the arrangement (someone appears to have added newer stones to the original setting to make the shape appear more complete). The stones are very small, some just barely clearing the surface of the turf, and the tallest only 2 feet high The name Cerrig Duon translates as 'the black stones'. It dates to the Bronze Age (2500 - 800 BC).

About 30 feet north of the circle is a very large monolith, or standing stone, known as Maen Mawr, 'the large stone'. The stone is about 7 feet high, nearly 3 feet thick, and about 4 feet wide, with a flat top and sides creating a well-formed rectangle. Outside it are two small stones in a row. One theory is that the Maen Mawr acts like the gnomon of a sundial, casting a shadow aligning with the small stones on midsummer day.

West of the stone ring are two rows of very small stones approaching at an oblique angle. The stones can be very difficult to see; the official CADW guidebook says there are 17 stones in the west row and 12 in the east row, but it can be hard to find more than 6-7. The east row is about 80 feet long while the west row is 135 feet, and the stones are about 16 feet apart. 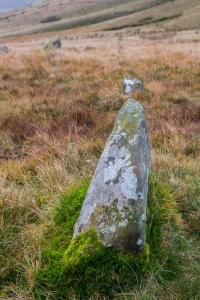 Looking along the stone circle
The stone rows may point towards the Waen Lleuch standing stone over 1/2 mile to the north east. While we can't know for certain, it is possible that the stones, and other ancient features in the surrounding landscape together formed a large ceremonial site, perhaps tied to seasonal alignments.

When you stand behind Maen Mawr it seems to align so perfectly with a gap in the hills to the south that the layout of the stone, the circle, and the rows must create an intentional arrangement, though for what purpose we simply don't know for sure.

I had an OS map along, and kept consulting it as I drove north, but even then I couldn't see the stone circle at all. I was fortunate enough to come across a pair of farmers rescuing a lamb from the river. After they'd recovered their breath they pointed to a nearby hill and told me the stone circle was on the brow of the hill. Even then I couldn't see it. I parked my car opposite the hill, and acting on faith, crossed the river with the aide of the rubber boots I had in the boot of the car for just such occasions.

Even though I knew roughly where to look, I still couldn't find any evidence of the standing stones. I was about to give up when I saw Maen Mawr ahead of me, on the brow of the hill, just as the farmers had said.

If you come from the north heading south you can much more easily see Maen Mawr on the hillside above the river as you approach. In fact, it is so obvious you'll wonder how you could have missed it from the south! An OS map will definitely help, but even then you might want to leave time to come south down the road to make certain you find the stone circle.

The circle stands on the west bank of the River Tawe, so you will need to bring a good pair of waterproof rubber boots along to cross the river! Though it is not deep or dangerous in any way, the stones are slippery, and when I crossed it the water level was over a foot deep in places, so I definitely had to pick and choose my path across the river with care.

Even though the stone circle itself is on a hilltop the site can still be very wet, so take care even after you've crossed the river. It isn't in the slightest bit dangerous, just wet! 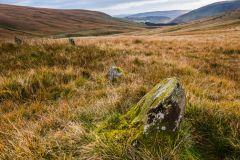