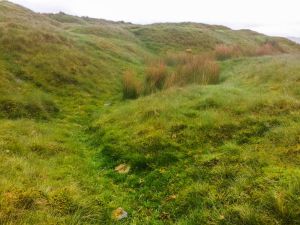 Pigwn Roman Marching Camps
Two temporary marching camps built one inside the other. The most obvious features are the low earthen banks that acted as a defensive perimeter. A Roman road connects the forts to nearby Pigwyn Stone Circles (Trecastle Mountain).

A Roman road runs over the top of Trecastle Mountain on the route between Llandovery and Brecon. At the summit of the hill (its not really a mountain, despite the name) is a pair of Roman marching camps, one partly overlying the other. The largest camp, called rather unromantically by archaeologists 'Y Pigwn Camp 1', was built first.

The larger fort has a pair of entrances, in the north-east and south-east, protected by internal earthworks. The Roman road later cut across the southern angle of the fort.

The second, small fort, fits almost entirely within the earlier fort, yet is laid out on a different alignment, so that part of it overlies the south-eastern rampart of the earlier fort. There are three visible gateways.

The type of construction suggests the forts are 1st century, perhaps during the rule of Agricola (AD 78-84), or under his predecessor, Julius Frontinus. It is thought that the first camp was built around AD 70 and housed about 5,000 soldiers, and the second camp was built to hold 4,000 men.

The camps were part of the Roman's attempts to subdue the powerful Silures tribe in south Wales. The camps were probably used for no more than one or two nights, but were considered necessary because of the fierce defence put up by the Silures to the Roman invaders. 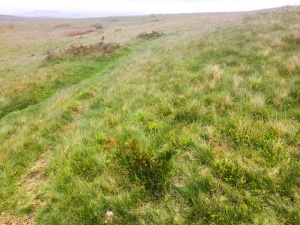 Remains of the fort earthworks

The defences are very basic, with an earthen rampart 14 feet wide and a ditch 12 feet wide. The site was carefully chosen; it stands at the end of a range of high ground, and commands views of the lower ground on all sides.

Below the fort, beside the Roman road, is a military practice work (marked as a Roman camp on OS maps).

Some time in the Norman period a motte, or castle mound was erected within the northern corner of the forts. A pair of milestones or carved pillars has been found beside the road just west of the forts.

The remains are little more than turf-covered foundations showing the outline of the forts, with nothing of note visible above ground.

What is a Marching Camp?

As the name suggests, it was a camp built by an army on the march. These temporary fortifications were built in a few hours and were never expected to be more than a safe place to stop while travelling. Some marching camps were later turned into more elaborate permanent camps, or forts, with timber or stone fortifications.

To find the fort turn south off the A40 in Trecastle, beside the antique centre. Follow the road uphill as it leaves Trecastle in the direction of the Usk Reservoir. Just south-west of the village, near the summit of the hill, is a single-lane road leading off to the right.

Take this road west and follow it for over a mile to a cattle grid, where there is just room to pull off the road and park. You will see a very useful information panel with a history of the site and a map. From there the track follows the course of the Roman road heading north. Follow the track on foot for 40 minutes as it goes straight west across the barren fields.

There are no signs to identify the Roman camps, so I found an OS map essential. Even then it was difficult to identify exactly which earthwork features were natural and which related to the Romans. It would have extremely useful to have signs on the site, but for some reason there were none.

Of course it did not help in our case that the day turned from dull and overcast into a miserable driving rain!

A short distance away are the Trecastle Mountain Stone Circles, and prehistoric monuments are scattered across the nearby fields.