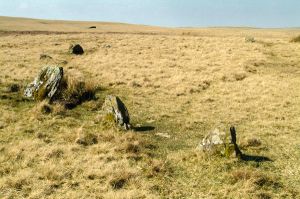 Nant Tarw Stone Circles
Two circles can be seen here, each composed of small stones. There are several larger fallen stones near the circles, plus a separate 3 stone grouping near the largest circle.
Nant Tarw is far more than just a stone circle; it has been described by the RCAHMW (Royal Commission on the Ancient and Historical Monuments of Wales) as a ritual complex.

The larger circle is 21 metres across, and is composed of 15 visible stones. The stones are quite small, wit the largest only 0.8 metres high. There may have been as many as 28 stones originally. To the west of the large circle is the second, slightly small circle, measuring 19 metres across. Again there are 15 stones, the highest reaching 0.7 but some just barely above ground level. The spacing between the visible stones suggests that there must originally have been 21 stones.

It is interesting that both stone circles have their tallest stones on the south east side. Another intriguing point us that the peak of Pen y Fan is visible in a cleft between Twyn Perfedd and Foel Darw. That suggests the possibility of the stones acting as a sightline, or observation point, with an alignment that was important to the builders.

Getting There
Nant Tarw is off the A40 between Llandovery and Brecon. Follow the road to the Usk Reservoir and park at the Mynydd Wysg parking area. The stone circles are just south of the reservoir and south west of the nearby forestry plantation. A good OS map is useful (use Explorer OL12)! The Clwyd-Powys Archaeological Trust (CPAT) has a free walk leaflet detailing a circular route linking several archaeological sites in the area.