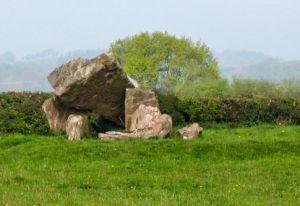 Gaer Llwyd Chambered Tomb
A small dolmen with a broken capstone that once measured 12 feet in length. The capstone probably covered a small chambered tomb.
The capstone is partly supported on 3 upright stones. Seven smaller stones lie scattered on the ground at the base of the monument. Curiously, the capstone is thicker than it is wide, an odd shape for a capstone.

History
The tomb dates to the Neolithic period, most likely in the early to mid 4th millennium BC. The location is beside an ancient track from the coast at Black Rock to the Black Mountains.

Another name for the tomb is Garnllwyd, which translates as 'Grey Fortress'. Local folklore suggests that the stones were thrown in a contest of strength between the Devil and a local man named Twm Sion Catti (or Jackie Kent if you prefer). Another version of the story says that Kent and the Devil were playing at quoits, and Kent threw the capstone so successfully that it landed on top of the upright stones, this ending the game.

Getting There
The tomb is quite easy to spot, in a farm field at the junction of minor roads with the B4235 at Gaerllwyd. If you use an Ordnance Survey map be careful, for it seems that the OS has incorrectly marked the tomb on the wrong (south west) side of the road. The stones are so close to the road that you don't even need to enter the far field but can just investigate the site from the roadside. There is a layby near the chapel for parking.

About Gaer Llwyd Chambered Tomb
Address: B4235, Gaerllwyd, Monmouthshire, Wales
Attraction Type: Prehistoric Site
Location: In a farm field on the B4235 between Usk and Shirenewton, beside the road junction at Gaerllwyd (almost opposite the chapel)
Location map
OS: ST447968
Photo Credit: Chris Andrews, licensed for reuse under the Creative Commons Licence