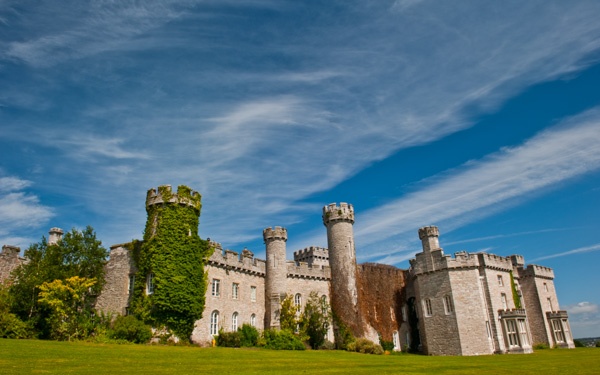 Around 1460 the Humphreys family built a fortified manor house at Bodelwyddan, near Rhyl. The Humphreys owned Bodelwyddan for over 220 years before selling it to Sir William Williams, Speaker of the House of Commons, in 1680. The mansion was completely rebuilt in Victorian Gothic style by Sir John Hay Williams from 1830.

Sir John also laid out the stunning formal gardens surrounding the house and enclosed the estate within a huge curtain wall. One of Sir John's architects was Joseph Hansom, inventor of the Hansom cab. 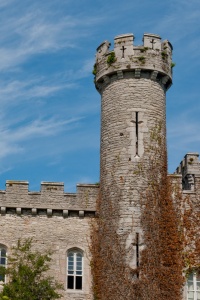 The castellated exterior
of Bodelwyddan

Unfortunately for Sir John, his improvements came at the same time as a slump in the lead mining industry which provided most of the family fortune. By the late Victorian period, the family were unable to keep up their standard of living, and by the early 20th century large parts of the Bodelwyddan estate had to be sold off.

The house was used as a hospital during WWI, and the grounds were used by the military as a training centre for trench warfare. After hostilities ceased the Williams family sold the estate to Lowther College, who established a girls school in the mansion.

Bodelwyddan was home to the College until 1982, when it had to close due to financial constraints. The Clwyd County Council purchased the estate and converted the castle into a museum and art gallery.

The art gallery was developed in partnership with the National Portrait Gallery, and the staterooms were restored to their Victorian splendour to act as a backdrop to the Gallery collections.

From 1994 part of the castle was split off to act as a luxury hotel, while Williams Hall was kept to house the National Portrait Gallery art collections. The Bodelwyddan collections focus on Victorian art and artists, in keeping with the history of the house.

Today Bodelwyddan Castle is a fascinating blend of 19th-century country house and art gallery, surrounded by formal gardens and 16 acres of woodland. The galleries are designed to provide a window into the Victorian world, with hands-on experience of 19th-century pastimes, inventions, and popular science.

One of the most popular pieces of art on show is The Bodelwyddan Centrepiece, the oldest surviving silver centrepiece in Britain. The Centrepiece was made in 1730 for the Williams family by Edward Feline. The superbly crafted centrepiece is of a style brought to Britain from the court of Louis XIV at Versailles and would have played a central part in formal dinners in fashionable society.

Bodelwyddan Castle is well signposted off the A5 near Rhyl. There is a large free parking area. Be aware that there may be a charge for parking when special events are on. For example, we arrived by chance during a busy historic automobile meet and had to pay for parking, which was refunded when we entered the castle.

The castle interiors are simply stunning, a wonderful example of Victorian Gothic fashion, with fanciful vaulted ceilings and ornate medieval details that are more in sympathy with Strawberry Hill Gothic than with actual medieval style. Every surface seems to be painted in rich, vivid colours of pink, red, and gold.

Unfortunately, we were not allowed to take photos inside the Williams Hall to showcase the interiors.

The Castle closed to the public on 30 June. The mansion itself and art gallery have been closed since February 2019 but the gardens and parkland have remained open to visitors until now. The property is still for sale and the estate agents say there has been a lot of interest, but so far no new owner has stepped forward. We will keep updating this page as things develop, in the hope that new ownership will enable the Castle to reopen to the public.

In a promising development, Denbighshire County Council has re-purchased the lease of Bodelwyddan Castle. This means that the long-term future of the castle is now assured. It remains to be seen what plans for the castle's future the Council will make, but we'll update this page as soon as we know more. 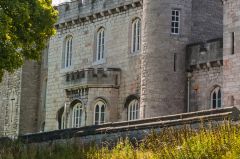 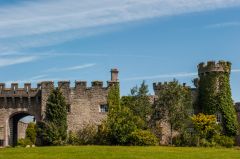 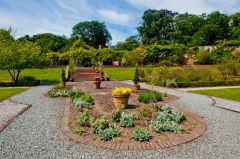 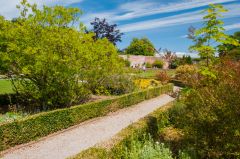 More self catering near Bodelwyddan Castle