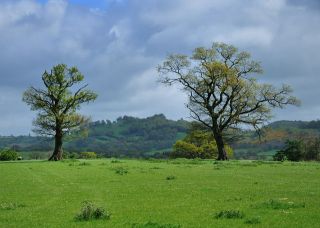 Caersws Roman Forts
There are two forts at Caersws. The first is small "conquest" fort, used as temporary lodging by the Legions during the initial invasion of Wales. Later, a larger fort was built to the north of Caersws village, and the remains of a tile kiln have been unearthed. Excavations have unveiled a large civilian settlement beneath the present village, supplied by roads and pipe-trenches.

The first fort near Caersws was built in a loop of the River Severn at Llwyn-y-Brain, less than a mile east of the village. We do not know exactly when it was erected, but it may have been during the reign of Claudius, who died in 54 AD, or of his successor, Nero, who reigned from 54-68 AD. This fort was not meant for a permanent garrison, but as a temporary campaigning encampment. Around 75-78 AD a new, smaller fort was built to house a permanent garrison of auxiliary troops, near the confluence of the Severn and Carno rivers, and more importantly, at the junction of several major Roman roads. The fort was square, with earthen banks and ditches enclosing an area of 7.75 acres.

The second fort appears to have been rebuilt several times, in 120 and 140 AD, before finally falling out of use in the late 3rd or early 4th century. The site was expanded with an annex on the northern side in the early 2nd century, and a large civilian settlement, or vicus, grew up to the south and east, where the modern village of Caersws now stands.

Excavations in 1854 revealed a bathhouse south of the fort, but this has now been covered over by the railroad. The bathhouse may have been rebuilt around AD 265. Excavations on the site unearthed sherds of pottery and polychrome glassware that seem to suggest a date of about AD 78 for the building of the fort.

In the centre of the fort stood a principia, or headquarters building, incorporating a regimental strongroom for storing pay, among other important items. This strongroom was rebuilt in stone in the late 2nd or early 3rd century (197-211 AD).

The origins of the Roman forts at Caersws are confusing to say the least. The site has been identified as Mediolanum, a town of the Ordovices tribe, and as Mediolanum, a town in the territory of the Cornovii tribe, more commonly linked to Whitchurch in Shropshire. It is possible that the spelling difference is simply a clerical error, or that there were actually two separate forts. The name Mediomanum translates as 'the central fist', suggesting the fort was the central of three Roman forts. Records do show that there were 3 major 2nd century forts in mid-Wales; the others at Castell Collen and Forden Gaer.

The modern Welsh name Caersws is just as problematic, for it translates as 'Fort of the Kiss', which sounds quite odd. One theory suggests that the second part of the name comes from Zeus, the Greek king of the gods. So the original town might have been called Caer-Zeus, which at least sounds plausible for a military encampment.

Remains of the second fort can easily be seen near the railway station in Caersws, which actually stands within the fort ramparts. The best section to view is just north of the station, across the A470. There is very little to see of the first fort at Caersws, which stands at SO042923. It is immediately north of the river, and just south of the Severn Way long distance footpath where it diverges from the B4569.

Just south west of Caersws is the hill fort of Cefn Carnedd, rumoured to be the place where the British leader Caradoc made his last stand against the Roman invaders.

About Caersws Roman Forts
Address: Caersws, Powys, Wales
Attraction Type: Roman Site
Location: On the A470. Parking in the village centre. The best exposed part of the fort is north of the rail station.
Location map
OS: SO029920
Photo Credit: Rod Trevaskus, licensed for reuse under the Creative Commons Licence 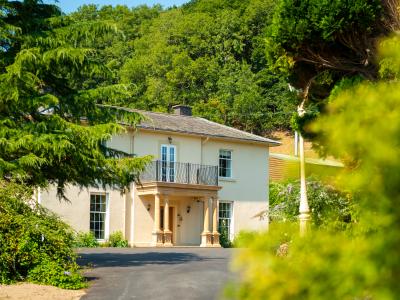 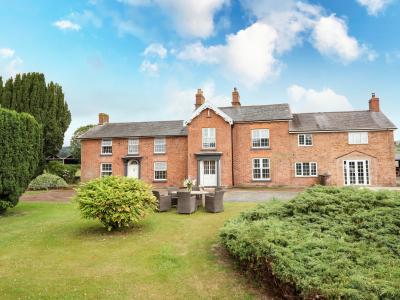 This excellent house rests in Trefeglwys near Caersws, Wales and can sleep 24 people in 10 bedrooms.
Sleeps 24