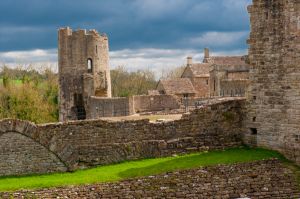 Begun (illegally) by Sir Thomas Hungerford in 1370 as a simple rectangular building and curtain wall. Sir Walter Hungerford, Thomas' son, added an outer court and dry ditches in 1420. In 1518 Agnes Hungerford had her husband strangled and burned in the kitchen furnace. Ouch!

The earliest recorded Speaker of the House of Commons was Sir Thomas Hungerford. In 1370 Sir Thomas bought the manor of Farleigh, on a rise above the River Frome just 4 miles from Trowbridge. It is a measure of the times in which he lived that Sir Thomas crenellated his manor (fortified it) without royal permission. In 1383 he sought and was granted a pardon from the king for the illegal crenellation.

Sir Thomas built a precisely quadrangular castle on the site, demolishing the existing parish church to make room for a defensive ditch. Sir Thomas built a chapel to serve his family, and today the Hungerford Chapel and the associated priest's house are now the best-preserved parts of the castle site. He also created a hunting park surrounding the new castle. 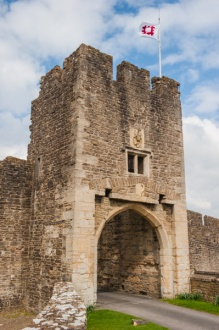 Walter, the 1st Baron Hungerford, added an outer courtyard around 1441, with a curtain wall enclosing an irregular area. He defended his new expansion with a round flanking tower and a gate tower reached by a drawbridge.

Walter also built a new parish church nearby, to make up for destroying the previous church. He was responsible for the Priest's House (1430), which now houses an exhibition on the castle history and shows objects found on the site.

Around 1600 the domestic buildings inside the castle were rebuilt, and the chapel was renovated in 1648 by Lady Margaret Hungerford following the death of her husband, Sir Edward.

The Hungerfords occupied the castle until 1686, save for a brief period when they forfeited the title as punishment for backing the Lancastrian cause in the Wars of the Roses.

By the late 17th century the family had fallen far from the dizzying heights they occupied in the Middle Ages, and they were forced to sell the castle to a local landowner, Joseph Houlton, who stripped the site of stone and used it to build his own residence of Farleigh Castle nearby.

What remained of the original castle quickly fell into decay. Only the chapel was left, and it was not until the late 18th century that this was protected from further ruin.

Great heights and great depths; that describes the fortunes of the Hungerfords of Farleigh. The castle builder, Sir Thomas Hungerford, gained great wealth as an agent serving a number of powerful lords. He was essentially an early estate agent.

Thomas's son, Sir Walter (1378-1449) was a soldier and courtier, who rose to be Treasurer of the realm. He was rewarded by being named the 1st Lord Hungerford. Both Walter's grandson and great-grandson were executed during the Wars of The Roses for their support of the Lancastrian cause. 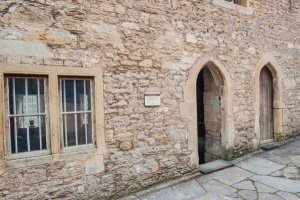 A Heritage of Scandal

In 1486 Henry VII restored the Hungerford estates, but then scandal struck. And struck again, and again.

The first blow fell in 1523, when Lady Agnes Hungerford, wife of Sir Edward, was found guilty of murdering her first husband and was hanged at Tyburn. Then her son-in-law, Walter Hungerford (1503-1540) was brought to trial for imprisoning his wife in a tower, trying to poison her, and 'unnatural vice' (usually a euphemism for homosexual behaviour).

He was beheaded at the Tower of London. Then Walter's son accused his wife of adultery and of trying to poison him. He lost his case and was sentenced to pay his wife's court costs. He refused and went to prison instead.

The Hungerford family had divided loyalty during the Civil War; Sir Edward Hungerford, who owned the castle, fought for Parliament, but his half-brothers John and Anthony were Royalists, and John took the castle for King Charles. But the tides of war turned, and in 1645 Sir Edward himself received the surrender of the castle garrison.

Sir Edward died in 1648 and is buried in the chapel. His royalist half-brother Anthony took ownership and managed to make peace with Oliver Cromwell. The castle passed in the end to another Sir Edward, nicknamed 'The Spendthrift'. It was his profligate spending habits that led to the decline of the Hungerford family and eventual sale of the property. 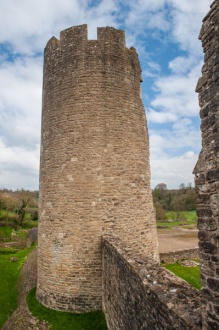 The oldest and least-preserved part of the castle, built by Sir Thomas Hungerford on a typical 14th-century quadrangular plan, with circular corner towers and a round gatehouse on the south front.

Much of the inner courtyard buildings have been reduced to little more than foundations, but enough exists to drive home what an impressive place it must have been when it was first built.

Only a pair of angle towers to the south still stand to full height. The ancillary buildings inside the castle are marked only by fragmentary footings on the turf. You can still see drainage ditches and the castle well, and the outer walls and towers erected by Sir Walter Hungerford are largely intact. 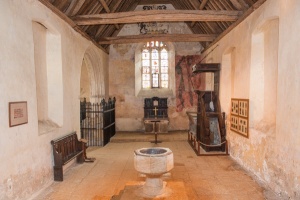 The chapel was built at the same time as the castle, though an earlier parish church stood nearby. It may have served as the parish church for a time, until Sir Walter Hungerford built a new parish church nearby and this became the family chapel.

The interior is light and spacious, with striking wall paintings and tombs of generations of Hungerfords. The most striking of these paintings is immediately beside the east window, where there is a very large figure of St George and the Dragon, painted around 1440.

Almost faded from view is a figure of Sir Walter Hungerford, kneeling in devotion to the saint. The St George figure is probably based on a statue that once stood in the Chapel of St George at Windsor Castle.

Adjoining the sanctuary is the Chapel of St Anne, built sometime before 1441 as a chantry chapel. Here it seems that every inch is covered with a memorial to a Hungerford family member. The oldest memorial is that of Sir Thomas Hungerford, builder of the castle, and his wife Joan (1412).

In the far corner is the ornate table tomb of Sir Edward (d. 1607) and Lady Jane Hungerford, while occupying the centre of the chapel is a very large monument to Sir Edward (d. 1648) and Lady Margaret Hungerford (d. 1672). Against the west wall is the tomb of Mrs Mary Shaw, sister of Sir Ward, who died in 1613. 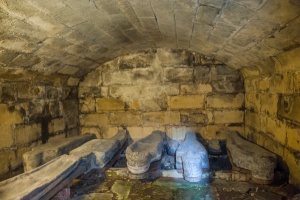 The crypt and lead coffins

In the sanctuary, under the large painting of St George, is the tomb of Sir Walter Hungerford (d 1596) and his son Sir Edward (d. 1613). Close to the west end, just in front of the 14th-century font, is a very worn tomb to an early medieval priest named Walter.

The pulpit and reredos behind the altar look aged, but they were built in the early 19th century, reusing pieces of 16th-century wood panelling and furniture. Another oddity is the stained glass, much of it medieval, but none of it original to the chapel; it was all brought here from elsewhere and assembled like a jigsaw puzzle.

Beneath the chapel, reached by a steep outside stair, is the crypt, an atmospheric small chamber containing a number of medieval body-shaped lead coffins. English Heritage calls them 'portrait coffins', which is perhaps overstating the case, but it is rare to see coffins so precisely shaped. 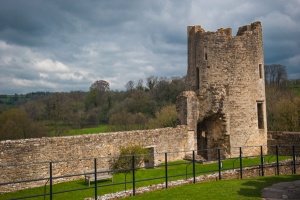 The outer wall and mural tower

The restored domestic chambers now house an exhibition centre, with displays on the history of the castle, the Hungerford family, and objects found during restoration of the site. Included are part of a Cabinet of Curiosities collected by the Houlton family when they owned the castle.

Among the displays is a 'he' Bible of 1611, so named for a spelling mistake in Ruth 3:15. One of the objects that caught my eye was an 18th-century tobacco stopper made of bronze, in the shape of a hand.

We've been to the castle 3 times now, and each time I find something new. The chapel is easily my favourite part; if this were a parish church it would be in every 'Top 1000 British Churches' list. The combination of the tombs, wall paintings, and the coffins in the crypt make a visit extremely memorable.

As for the castle itself, there is a lot to see, from the layout of the domestic quarters to the towers that still stand to a great height. You can't climb any of the towers, but you can stand at the base of the Lady Tower and wonder at what really happened to Lady Hungerford who claimed to have been imprisoned here and poisoned by her husband. 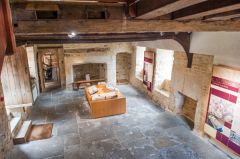 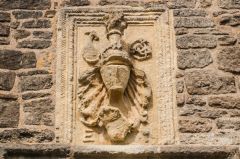 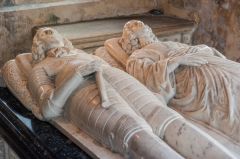