HERITAGE HIGHLIGHTS:   One of the best preserved Saxon churches in England 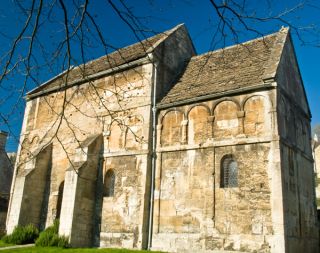 The tiny Saxon church of St Laurence at Bradford on Avon is one of the best preserved Saxon sites in England. Originally built around the year 1000, for many years the church was used as a school, and its ecclesiastical origins were lost. Now fully restored, it provides a moving glimpse of Saxon architecture and worship over a thousand years ago.
History
The tiny church of St Laurence in Bradford on Avon is one of the most remarkable survivals from the Saxon era in England. It is neither the largest nor the most elaborate Saxon church to survive, but is surely one of the least altered, and it gives an awe-inspiring glimpse into the pre-Norman past.

Discovery of a long-lost church
And what a chequered career the building has had! It was lost for centuries behind a jumble of nearby buildings, and served as a warehouse, a school, and a dwelling. It was not until 1854 that the vicar of nearby Holy Trinity church, Canon Jones, noticed an odd roofline among the buildings pressing close to his church. He looked closer and found carved angels set into the building wall. Canon Jones called in James Irvine, clerk of works for architect George Gilbert Scott, to examine the building. Irvine declared it to be 11th century, but subsequent examinations have pushed that date further and further back. Or have they? 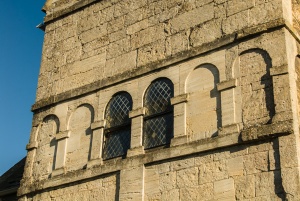 Restored blind arcading on the tower
After research into historical documents, Canon Jones decided that St Laurence's was built around AD 700, possibly by St Aldhelm. However, there seems to be some dispute about that interpretation, and other historians tend to think that it was built for the nuns of Shaftesbury Abbey just after AD 1001.

We know that Aethelred gave Bradford to the Abbey in that year, and the church may have been built to hold the remains of Aethelred's brother, Edward the Martyr. It makes more sense that Edward's body would have been carried to a monastic church that stood where All Saints is now, though, so perhaps St Laurence was a mortuary chapel for the larger church? The truth is that we don't know when or why the church was built, but that does not take away from the historical importance of this beautifully preserved building.

The church was certainly renovated in the early 11th century, but since then it has remained essentially unchanged. There are Saxon windows in the south nave wall, south chancel wall, and in the porticus, or transept. A plinth runs around the walls and a pilaster strip decorates the narrow, round-headed doorways.

Why was it 'lost'?
The most likely answer is that the Normans abandoned St Laurence in favour of Holy Trinity, a stone's throw away. As a result, the church was left in its original Saxon state and simply adapted to different purposes throughout the medieval period until its original function as a church was forgotten.

It is hard to imagine a simpler building and that is part of its appeal. There is a very narrow, high nave, leading to a tiny chancel, and a small transept. The exterior of the building is decorated with traditional Saxon motifs; blind arcading and very simple pilaster strips, and two buttresses support the high nave wall. The interior is very dim, mysteriously so, with a very narrow round-headed arch leading to the chancel. 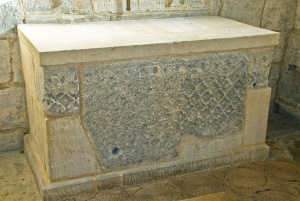 The restored stone altar
Above the Saxon chancel arch are small carved angels set into the wall, the survivors of the original rood. Against one wall is a free-standing piscina on a pedestal, and the altar table is made with an intricately carved fragment of stone, decorated with diamond shapes. Above the altar are fragments of a stone cross.

Other than that, the interior is almost completely bare, but that just serves to accentuate the age and sense of mystery. I've visited St Laurence's church on two occasions, and honestly, it is just an awe-inspiring place.

It is quite remarkable that the church has survived in such an unaltered state, and it really gives a marvellous glimpse into the Saxon world. Don't come here expecting grandiose architecture; you won't find it. What you will find is something far better; a fascinating building that gives off an aura of age and mystery. For my money, St Laurence is one of the most enjoyable Saxon sites in England, and well worth a special trip to see. 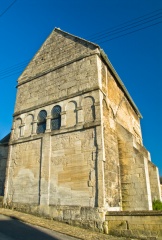 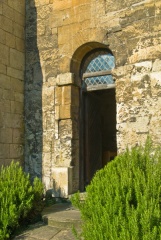 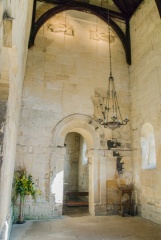 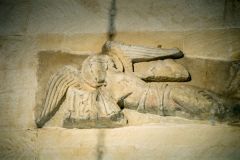 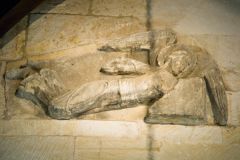 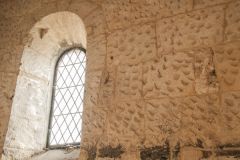 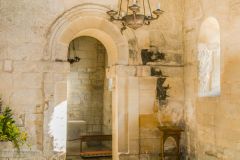 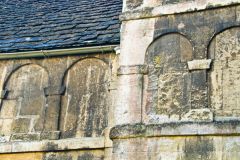