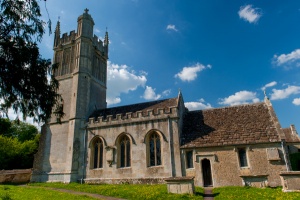 The church of St Mary the Virgin stands some distance from the village of Westwood, beside historic Westwood Manor (National Trust). Both church and manor date to the 12th century, but while the manor was rebuilt in the Elizabethan period, the church shows its medieval roots.

In the chancel you can still see Norman stonework and narrow lancet windows, but the south side of the chancel was rebuilt in 1840 by Charles S. Adye, the town surveyor for nearby Bradford-on-Avon.

The nave, by contrast, was rebuilt in the 15th century in Perpendicular style, to be followed by the north chapel and the striking tower in 1530. Both tower and nave were rebuilt by Thomas Horton, then owner of Westwood Manor. It is the tower that draws your eye, with a peculiar cupola atop an ornate corner stair turret.

The upper stages of the tower are beautifully carved with figures of grotesque creatures and ornamental designs. The design is similar to other towers in Somerset and Wiltshire, which suggests that they were crafted by the same team of masons who travelled around the region from church to church. 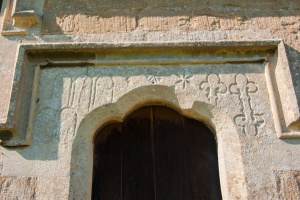 Set into the south wall of the chancel is a priest's door under a trefoil-headed opening topped by a square hoodmould. In the spandrels are peculiar incised carvings; on the left are a series of 5 arches, like an arcade, while on the right are a pair of floriated crosses, partly cut off the doorway opening. From all appearances, these carvings look early medieval, perhaps dating to the earliest 12th-century church on this spot.

The original dedication of the church was to All Saints, but sometime around the 16th century this was changed to St Mary the Virgin, perhaps at the time Thomas Horton rebuilt the nave and tower.

The chancel windows boast very colourful 15th century stained glass. The central panel of the large east window has something unique; it shows the Crucifixion, but the figure of Christ is surrounded by lilies, symbolising the Incarnation of Christ.

This combination of lilies and the Crucifixion is rarely seen, and the Westwood east window is thought to be one of only 7 such instances in existence. The side panels show angels holding shields. By contrast with the chancel, the nave windows hold only a few fragments of medieval glass. 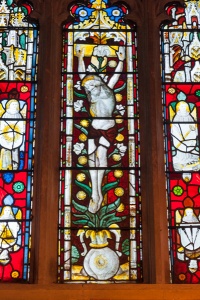 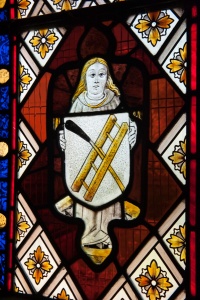 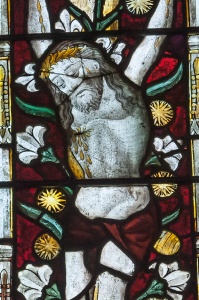 The Old Lad of Westwood

On an angle of the west nave wall, immediately over the font, is a grotesque carving of a strange beast; a winged demon with its mouth open in a snarl, looking very much like a dragon. This figure is commonly known as 'The Old Lad of Westwood', 'The Westwood Imp', or 'The Devil of Limpley Stoke'. It is thought to have been carved in the 16th century. Immediately under the figure is a faded inscription 'Resist me and I will flee'. But why is the demon hovering above the font?

Tradition suggests that it is gnashing its teeth at every child who is baptised into Christianity in the font, and the inscription simply means that if you resist the demon's evil intent and a child enters the church, it will be forced to flee. One wonders how many infants have been frightened by the grinning demon hovering over their baptism - or did they even notice?

THE OLD LAD OF WESTWOOD (THE IMP) 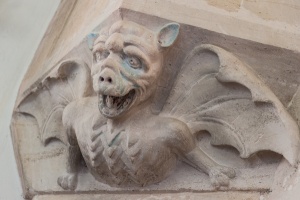 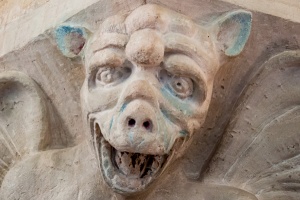 Closeup of the Imp 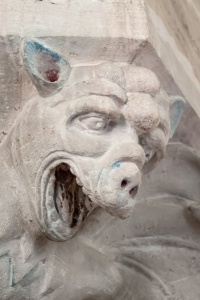 The font itself is 13th century, and rather plain, but it is topped by an elaborate 16th-century carved wooden cover. The cover is a copy of the cupola atop the tower stair turret. Also of oak, though slightly later (1607) is the nicely carved wooden pulpit, brought here from Norton St Philip.

The screen is also very nicely carved; it is 17th century and is made up of pieces from an old communion rail. The choir stalls are 15th century, with some very nice traceried panels. Aside from the wooden pulpit, there is an earlier stone pulpit base from the 15th century. 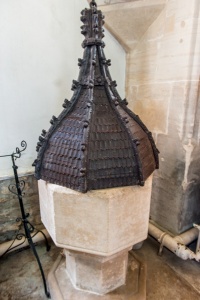 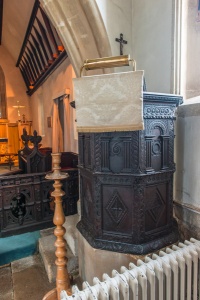 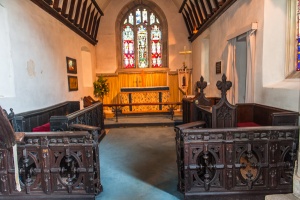 There are several interesting memorials, including one to John Painter (d. 1728), with an inscription topped by symbols of mortality; a skull with wings, crossed bones, and an hourglass. Nearby is a monument to John Farwell (d. 1642).

On the south wall of the nave is an oval plaque to Richard Cox (d. 1789). In the chapel is a very nice stone tablet to Charles Franklin, carved with heraldic symbols. There is no apparent date, and Nikolaus Pevsner's voluminous 'Buildings of England, Wiltshire' information for the church seems unsure. For me, the finest memorial is to William Bushe (born 1446), with elaborate scrolls and heraldic symbols. 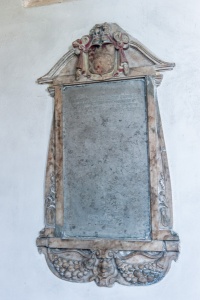 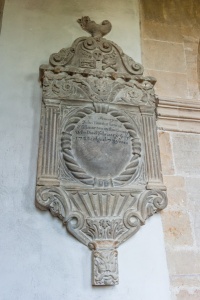 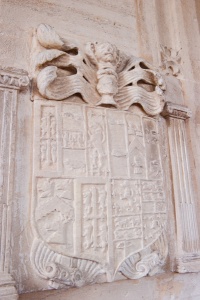 There are two squints through the angle of the chancel arch, allowing people seated in the north chapel to see the altar.

We popped into the church after a visit to Westwood Manor, on a hot summer day when the only thought on my daughter's mind was where to find the nearest ice cream. I don't know about her, but I was really glad we had taken the time to explore the church.

The 'Old Lad' carving is very striking, and the stained glass is excellent. I would not have realised how rare the east window glass is if the very friendly and chatty volunteer guide hadn't told me. I'm happy to report that no ghosts appeared during our visit, and we left happily, the only trauma provided by the Westwood Imp carving and the lack of ice cream! 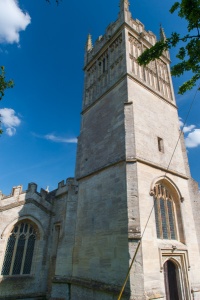 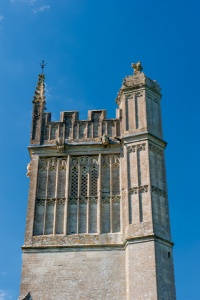 The tower and stair turret 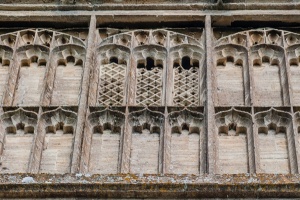 Upper stage decoration of the tower

More self catering near Westwood

More bed and breakfasts near Westwood