Clyro Roman Fort
A large 1st century Roman camp was built on the west bank of the River Wye near Clyro. The site was established around AD 60 and was briefly occupied on two occasions before being abandoned before AD 69.

The vexillation fort at Clyro is a large site, covering roughly 26 acres. It was established around AD 60 as part of Roman attempts to subdue the Silures tribe of mid Wales. The fort occupies a small hilltop only a few hundred yards on the Welsh side of the river.

Definition
A vexillation fort usually covered 20-30 acres and was made to hold both legionary and auxiliary troops, as well as offering a storage depot and serving as a winter base during a major campaign.

The fort measures about 1300 feet on a north-east to south-west axis, with a width of about 860 feet. The earthwork ramparts were defended by a double-ditch and would have been topped by a palisade of timber posts. The site was used briefly twice and then completely abandoned before AD 69. Excavations revealed very few finds beyond sherds of Samian ware pottery, ovens, and the base of a donkey mill.

There is very little in the way of remains to see on the ground. The site lies in a farm field beside Boatside Farm, and is bounded to the eat by the Offa's Dyke Path and the river. The site can be seen from the minor road running past the farm, and one edge of the hilltop site can be seen from the Offa's Dyke Path, but for a closer look, please ask at the farm for permission.

Clyro has been put forward as the site of a conflict between the Roman 20th Legion and the Silures tribe. As the Roman historian Tacitus recounts in his Annals, a camp prefect and several cohorts were deputed to build garrison posts in Silurian territory. The Silurians attacked, killing the prefect, 8 centurions, and 'the boldest' of the rank and file soldiers. If not for the timely arrival of reinforcements from nearby camps, the legion would have been lost 'to the last man'.

The Agent's House Bed And Breakfast - 3.5 miles
Hereford, Herefordshire
From: £70.00 This detached lodge barn rests on the outskirts of Hay-on-Wye and houses two bedrooms, sleeping up to four people.
Sleeps 4 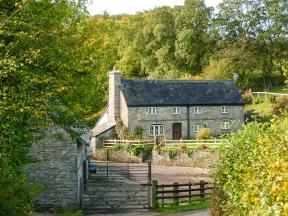