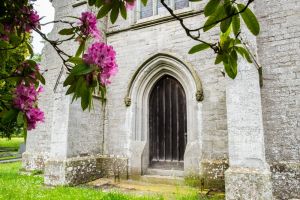 The Penoyre family had owned land in the area for over 500 years. Not only did the fund the building of the new church but a member of the family, Rev WT Penoyre, was the first vicar. The Moor mansion itself is no more, having been pulled down in 1951.

Hardwicke Church was designed by architect Thomas Tudor of Monmouth and consecrated by the Bishop of Hereford in 1851.

The hammer-beam nave roof is said to have been built with timbers from the Moor estate, as were the carved oak pews. The roof is decorated with figures of angels carved by the Superintendent of the works, a Mr Maddox.

The nave lights were originally oil lamps. The lamps have been retained but have been converted to electricity.

There are six two-light windows in the nave, each of the panels depicting one of the Twelve Apostles. The east window is three lights, with stained glass depicting the Crucifixion flanked by scenes of the Baptism of Christ and the Supper at Emmaus. The window was installed as a memorial to Francis Penoyre of The Moor. By contrast to the colourful east window, the side windows in the chancel are mostly geometric patterns. 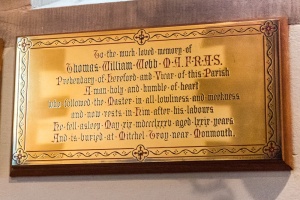 One window on the south side, nearest to the chancel arch, shows a ship under sail. This may have been a thanks-offering for the safe return of some Penoyre family members from a voyage to Jamaica.

In the north wall is a depiction of an angel announcing the birth of Christ to the shepherds. It was designed by the architect Thomas Tudor and given as a gift to the church. The west window has glass representing the three cardinal virtues of Faith, Hope, and Charity. It also is a memorial to the Penoyre family.

One of the best-known people associated with the Hardwicke church is Rev Thomas Webb, vicar at Hardwicke from 1856-1885. Webb was an avid astronomer and built an observatory in the garden of Hardwicke Vicarage. He wrote numerous books on astronomy, including a standard reference work entitled Celestial Objects for Common Telescopes. A memorial plaque to Webb can be found under the ship window in the chancel.

On the north chancel wall is a memorial to Mrs Frances Penoyre, one of the church sponsors. Under the organ are plaques commemorating three men who served as organist for the years 1851 - 1994. That's three organists in 143 years!

The organ itself has been listed Grade I by the British Institute of Organ Studies because of its unusual and very vivid pipe decoration.

The reredos behind the altar was installed in 1898. Other highlights include the beautifully carved font, carved by Edwin Hughes, and an oak eagle lectern.

In the churchyard are more Penoyre memorials, including those of Frances, her daughter Anna Maria, and her son-in-law Rev. WT Penoyre, the three founders of the church.

Finding Hardwicke church proved a bit of chore for our family. The official postcode took us to a house on the B4352, near the village school. As we discovered the church is actually on the B4348, just east of its junction with the B4352. The road is signposted to Dorstone from the junction.

The church is on the north side of the road but is set so far back that we initially drove right past without seeing it. We were lucky that we had a good OS map with us and quickly realised our mistake. The church is normally open to visitors and was open when we visited. 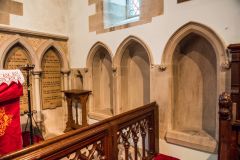 The Agent's House Bed And Breakfast - 2.2 miles
Hereford, Herefordshire
From: £70.00