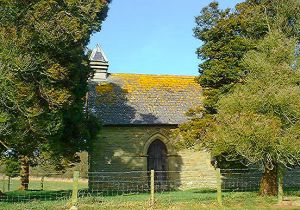 This remote chapel stands far from its village, on the slopes overlooking the Wye Valley.

The small, simple building, also known as Capel-Bettws, served as a chapel of ease for Clyro, with the village almost 3 miles to the south. It has never been a parish church and still serves as a chapel of ease for the Clyro parish. The first written record comes from 1566, when it is referred to as 'y bettws', or 'the prayer house'.

Almost nothing is known about the early medieval chapel, but the 14th century roof timbers certainly suggest a time-period for its construction. Parts of the rood loft date to slightly later; from the late 14th or early 15th century. The single-celled building was completely rebuilt in 1878 by F R Kempson of Hereford.

The font is 13th century but was not original to the chapel; it was brought here from St Michael's church in Clyro itself.

The most striking historic feature is the 14th century nave roof, built with 4 bays and supported on corbelled posts. In both the chancel and nave are unused wooden corbels projecting out from the wall and decorated with elaborate carvings.

A moulded tie beam spans the chancel, marking the location of the medieval rood loft. The parapet facade of the loft survives, and is a beautifully carved example of medieval; wood carving, with an open arcade and intricate tracery.

The famous Victorian diarist Francis Kilvert served as curate of St Michael's church in Clyro from 1865 to 1872. He knew the chapel very well and considered it among his favourite churches.

The Agent's House Bed And Breakfast - 2.5 miles
Hereford, Herefordshire
From: £70.00