Self Catering in Isle of Wight - Freshwater 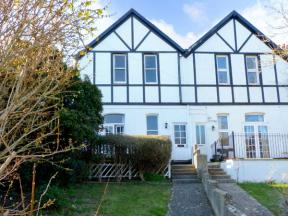 This end-terrace cottage is set within walking distance of Freshwater Bay and sleeps six people in three bedrooms.

The Maltings is an end-terraced cottage in a mock Tudor style within 6 minutes' walk of Freshwater Bay. This cottage sleeps six people in three bedrooms consisting of one king-size double, one double and one twin, as well as a family bathroom. The cottage also has a fitted kitchen with dining area and a sitting room with gas fire.

Outside there is off road parking for two cars and a front decked area with furniture and BBQ. The Maltings is an ideal family holiday home for exploring the delights of the Isle of Wight.

Charming cottage, family friendly
Nice, spacious cottage, well located with Freshwater bay just 5 minute walk, or lots of walks available in countryside. whilst we didn't have great weather, the outdoor decking area to front of house was a nice suntrap, ideal for eating breakfast peacefully in morning. We chatted to the neighbours several times who were very friendly and gave good suggestions on places to visit, beach tide times etc I disagree with some of the other reviews, the cottage certainly wasn't 'dirty', but probably could just do with a deep clean of less obvious places such as under furniture, inside cupboards etc. I did find it a bit odd that several cupboards, drawers etc appeared full of personal possessions, particularly kitchen. Suggests the cottage is 'lived in' for a portion of the year. We were left unclear if such items were left for use by us. Perhaps a good de-clutter of cupboards and drawers would be good. Both bathrooms/showers worked well with excellent hot water. Downstairs shower room, turning the head slightly away from the door prevents the water escaping all over the bathroom door, as we discovered over course of the week. Overall, a really nice, spacious cottage suitable for a family of six
slinkykev
2020-09-20

could be better with a little effort
only 4 reviews of this property and none since 2018, so here is an update. first some positives - the parking issue has been fixed by the creation of a parking space at the front of the house. the location remains excellent with the beach a short walk away, as is the excellent Piano Bar and the local shop. Freshwater village and other beaches are a short drive. On arrival, the new dishwasher didn't work, but was fixed a few days later (no cutlery tray though) But many of the observations elsewhere are still valid. The house does need a proper deep clean, both to remove dust/dirt but also to help air the property. The downstairs shower is excellent, but in desperate need of a shower curtain. the bath mat was constantly soaked. The main bedroom bed is simply not fit for purpose - a very thin mattress and a noisy spring bed everytime one of you moved. A new bed would have made all the difference. The upstairs doors all squeak, as we found out during the night - a simple dab of WD40 should fix this. the red sofa in the lounge really needs replacing and the DVD remote control is still missing. (see feb 17 review) this property could be so much better with some major (deep clean/new bed/new sofa) and some minor (shower curtain / replace the missing DVD control !! / WD40 on the doors) tweeks. hopefully any review next year will show some progress.
Bradley M
2020-08-24

Could be lovely if a bit more care and money was spend on it
I have just returned from staying at this accommodation - we were a group of four. At first glance we were very pleased with Location and the accommodation. Location was ok, it was quiet and within reach of Freshwater bay, Freshwater village and local shop was approx 20 mins walk away.(only mins in car) There is plenty of space, towels were ok (beach towels were also included ) The patio at front was a good use of space as the space at back was for your car only. Fresh flowers were a nice touch. Beds comfortable. Main bedroom had en suite. The other two bedrooms had to share bathroom and toilet which was downstairs. (Which is ok during the day, but a bit tricky during the night) The down side was, it needed a really good clean (toe nails on floor in my bedroom) Dust was obvious, downstairs shower was full of hair which we had to pick out so that the water could flow freely. A shower curtain was badly needed as the floor was always soaked after taking a shower, so was the mat !!! Kitchen would benefit from Sharp knives (we found it was really hard to make a meal as knives were blunt). More plates, etc are needed together with a tea pot. Side entrance to parking your car is extremely tight. We were so glad our car had modern technology on board to help us actually get up the side and around the back. At the back it is unclear which parking space is yours. We thought the second parking was for next door ? Can't really comment on DVD / radio etc as didn't use them. WiFi seemed to be ok .
Jomac129
2018-07-01

Grubby, disappointing, moth-eaten, neglected - we hated it
We should have followed our first instincts and turned straight around and gone home. After complaining to Sykes Cottages we got £100 compensation. This was such a disappointing holiday. The house could be lovely but has been left to moulder (literally, in the case of the lean to, downstairs bathroom). The stair carpets and two small bedroom carpets were badly moth-eaten. The cobwebs in the hallway and downstairs bathroom (around the toilet) were hanging with dust. Over ten pieces of crockery were badly chipped, and others were cracked. there was opened packets of food left in the fridge. The front door was swollen shut, and the key rusted into it, so it could not be used. The driveway to the house is just about the width of a car, with a very sharp turn, could be only be accessed if the road outside was empty (rarely) and is used as public pedestrian access to other properties so we had people standing outside the kitchen window as we ate our breakfast - nice. The owner neglected to answer any of our texts and then turned out to be staying next door, supervising a large building project on the two houses next to that. Builders vans and loud music in the morning at the back of the house were an unwelcome surprise. The front garden was so over grown as to be unusable. The towels were large, as were the holes in them. The remote control was missing from the dvd player. There were several pretty lams with no plug sockets to make them usable. The stereo was broken. Everything had a layer of dust and long established dirt about it. I feel that the photos of the house probably were true when it was first marketed, but it needs a darn good clean and new carpets before anyone else visits, and a good reduction on the price.
W6886EUcharlotteb
2017-02-06

We thoroughly enjoyed our week in Freshwater at The Maltings and wouldn't hesitate to recommend it. In a lovely location with a wonderful cafe bar called The Piano just round the corner. We were very lucky with the weather, sitting out on the front terrace in the sunshine was blissful!
Mrs Brannan
2014-09-28

Get an Ordnance Survey map covering the Freshwater area.