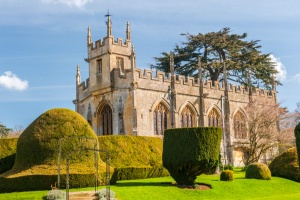 History
Beside the castle at Sudeley stands the small Perpendicular church of St Mary's. Around 1070 the Norman lord Harold de Sudeley built and endowed a church (provided money and income from his estates to maintain the church and a priest). Harold's son John granted Winchcombe Abbey the right to collect tithes on all Sudeley lands, and the abbey sents monks to hold services at St Mary's.

In 1122 this practice was banned by the Pope, and we have no record of whee the priests came from. In 1175 Sudeley church was listed as a dependent chapel of Winchcombe Abbey. Just a few years later Robert Tracy was listed as both a chaplain to Ralph de Sudeley and a parson of Sudeley. This suggests that St Mary's was now serving an independent parish, even though the parish church of St Peter in Winchcombe was just a short walk away in the centre of the village.

In 1460 Ralph Boteler, Lord Sudeley, decided to rebuild the Norman church. He seems to have asked a stonemason to carve heads of his friends in the exterior window stops. Each face is different, though they seem to have been drawn from only two models. On the east wall, behind the high altar, are a pair of heads that may be Lord Ralph and his wife Elizabeth. 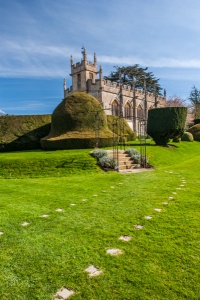 The two heads flanking the west door are thought to be Henry VI and Queen Margaret. It is interesting that the medieval mason's marks found on stones throughout St Mary's also appear on stones in the castle and in St Peter's church in Winchcombe, suggesting that the same team of masons worked on all three structures at the same time period.

Above the west doorway in niches are Victorian statues representing Henry VI and Queen Victoria, in whose reigns the church was built and restored, respectively.

In 1547 Thomas Seymour gained control of Sudeley Castle on his marriage to Queen Katherine Parr, widow of Henry VIII. To prepare the castle for the new couple's arrival a covered gallery was erected between Katherine Parr's apartments in the castle, to the private family pew in the church.

The route of this 'Queen's Walk' is marked by trellises and stones on the turf leading from the castle to the south side of the church, where a large blocked arch shows the location of the family seating area. A small squint, or hagioscope, allowed family members a view of the high altar. The openings in the squint are now filled in with fragments of medieval stained glass.

Katherine Parr died just a few days after giving birth to a daughter at Sudeley, and was buried near the altar of St Mary's church. She is the only queen of England buried in a parish church. An elaborate memorial to Queen Katherine was erected over her grave, but this was destroyed during the Civil War.

Sudeley Castle and its church changed hands several times during the Civil War. Both Parliamentary soldiers and Royalist supporters used Sudeley as a military base at different times. The church suffered badly during this period, and by the end of the war it was a roofless shell, and only the seats remained of the interior furnishings.

A Royalist broadsheet published during the Civil War accused the Parliamentary soldiers occupying St Mary's of all manner of sacrilegious and disrespectful acts of violence and destruction. According to the broadsheet, soldiers dug up graves and scattered the ashes of the deceased. They stabled their horses in the tower, used the Communion table as a butcher's block, hung animal carcases on the pulpit, and threw animal offal into the Chandos burial vault.

Was the account accurate? Well, remember that both sides in the war used every opportunity to impune the other. It is likely that the account contained a mix of fact and fiction guaranteed to paint the Parliamentary soldiers in the worst possible light. But, though every detail of the account may not be accurate, it is certainly true that by 1649 the church was a roofless ruin, open to the elements.

Since the main body of the church was ruinous, the Rector of Sudeley (who was also Vicar of Winchcombe) and his parishioners used the side chapel for fortnightly services. You would imagine that this temporary arrangement could not last, but it did. For two centuries.

Rescue arrived in 1855 when the Dent family bought Sudeley Castle. They discovered the ruinous church, overgrown with ivy, trees sprouting from its walls, the ancient pews rotting. The Dents brought in one of the foremost architects of the mid-Victorian period, Sir George Gilbert Scott, to restore the church.

Scott designed a new church, with beautiful woodwork in a neo-Gothic style. J Birnie Philip, who was most famous for designing the Albert Memorial in London, was called in to create the marble font, beautifully carved reredos behind the altar, and the three-seat sedilia beside the altar. Next to the sedilia is the medieval squint, which once provided a view from Queen Katherine Parr's pew to the altar. 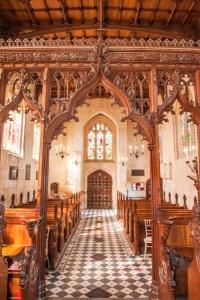 The screen and nave

Birnie also carried out Scott's design for Katherine Parr's memorial, on the north wall of the chancel, opposite the sedilia. The chancel is filled with beautifully crafted stalls, each provided with a misericord carving under the seat. Separating the chancel from the nave is a magnificent wooden screen in Perpendicular Gothic style.

The Stained Glass
Aside from the Parr memorial and Victorian woodwork, the other major feature inside the church is a series of richly coloured stained glass windows by Frederick Preedy of Worcester, inserted in 1862.

The windows depict a mix of religious themes and historic figures associated with Sudeley Castle. This 'timeline of Sudeley' includes Kenulf, king of Mercia (796-821), whose royal estates included Winchcombe and Sudeley. Kenulf is credited with founding Winchcombe Abbey. Another figure from Sudeley's past is Edward the Confessor, who gave estates here to his nephew Ralph, Earl of Hereford. And of course, there are the Tudor characters whose tale is entwined with that of the castle and church.

One window shows Katherine Parr flanked by Henry VIII and Thomas Seymour. Another shows Charles I, who stayed at Sudeley for 3 days during the Civil War, flanked by his nephew and military commander, Prince Rupert, and George, the 6th Lord Chandos, who raised a regiment to support the Royalist cause. The windows are a reminder of just how closely tied the church is to the castle and the turmoil that has centred on Sudeley over the course of its history. 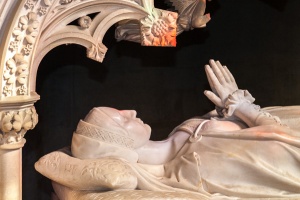 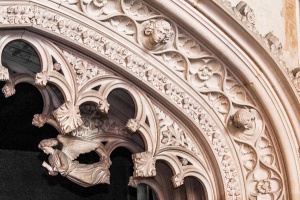 Detail of the memorial canopy carving 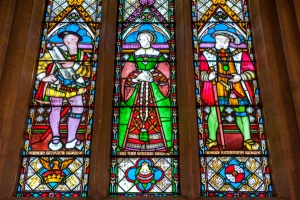 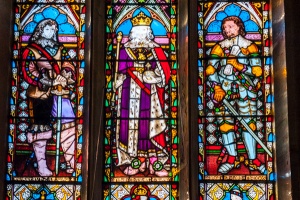 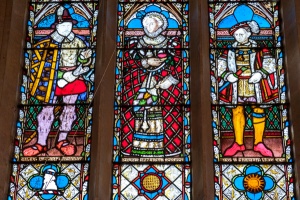 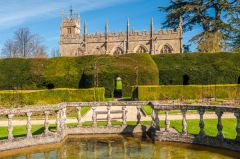 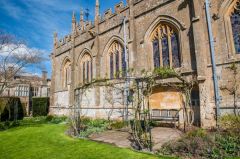 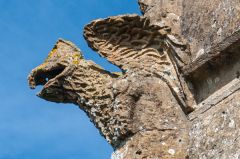 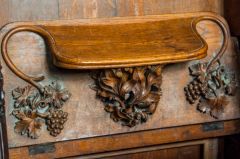 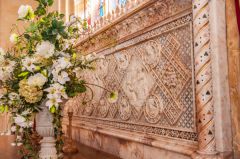 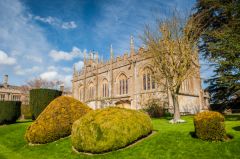