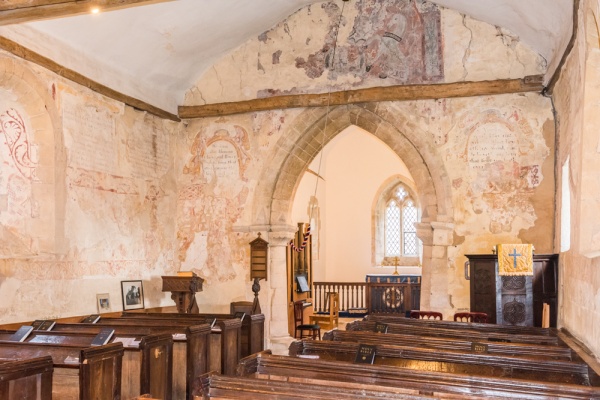 The 12th-century church of St James the Great in Stoke Orchard is an unassuming building. At first glance it does not even look like a church, until you see the small bellcote over the junction of the nave and chancel. The church dates to AD 1170 and was established as a private chapel for the local lord. It later became a chapel of ease so that parishioners did not have to walk all the way to Bishops Cleve to worship. 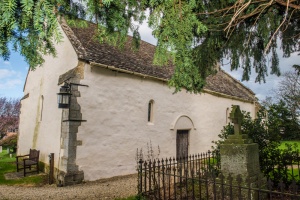 The exterior is plain to the point of being drab, but the plain exterior hides a medieval delight; a series of wall paintings created between 1200-1273. The paintings were hidden for centuries under layers of whitewash, and were only uncovered during restoration work in the Victorian period.

The wall paintings tell the story of St James of Compostella in a set of 28 distinct panels set off by unusual decorative floral borders. Among the wall paintings are depictions of animal heads that appear to be Scandinavian, or influenced by Nordic traditions.

The paintings are unique in England, and suggest that Stoke Orchard was on an ancient pilgrim's route to Compostella in Spain.

The paintings seem to cover every surface in the nave, extending up to ceiling height. Though many sections are faded enough remains to give a very clear idea of the design. A series of old photographs are arranged around the nave, along with explanations to give a better idea of each section. 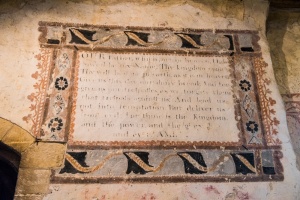 Wall painting of the Lord's Prayer

The wall paintings naturally get most of the attention, but there are many other historic features to enjoy. The font is Norman, carved with interlaced arches, and the chancel arch was inserted around AD 1300 after the original arch was damaged by subsidence.

If you look closely you can see that the south pier leans at an angle and the body of the church is markedly canted to the south east. The chancel may originally have been painted like the chancel, but it eas rebuilt in the 14th century, and large windows inserted in the following century.

The nave has Jacobean pews, and the wooden pulpit is from the same era. Around the splayed window openings are decorative wall paintings dating to 1663.

What makes the wall paintings so fascinating is that they have been painted over several times, so its like a large-scale puzzle to make out which bits are painted on top of which other bits.

The earliest painting is the story of St James, created around 1180-1220. This is thought to be the only wall painting of St James' life in Europe. Parts of the paintings are hard to make out, but other parts are very clear. The most obvious feature is a very large spoked wheel. In the 16th century parts of the paintings were covered with Biblical texts. With some difficulty can make out the Ten Commandments, and the Lord's Prayer, on the north wall opposite the entrance.

Stoke Orchard church is a delight, full of historic interest, and well worth a trip to see. The outside might not look impressive, but just wait until you step inside the door! 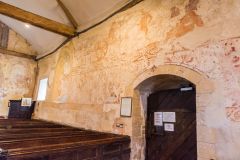 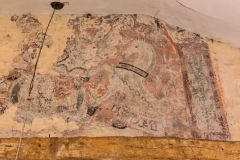 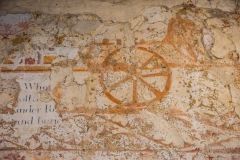 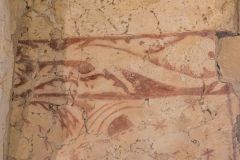 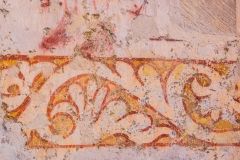