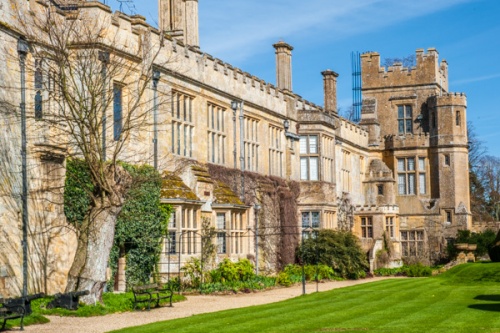 Sudeley Castle, near Winchcombe, is steeped in tradition and royal connections. The home of Lord and Lady Ashcombe, the manor of Sudeley once belonged to King Ethelred the Unready. But Ethelred was only the first of a long series of monarchs and other royalty to visit Sudeley.

Here Queen Katherine Parr lived and died. She is buried in the lovely chapel within the grounds that bears her name. Henry VIII, Elizabeth I, and Charles I, all stayed here. But the history of Sudeley is more interesting than just a collection of royal visitors. 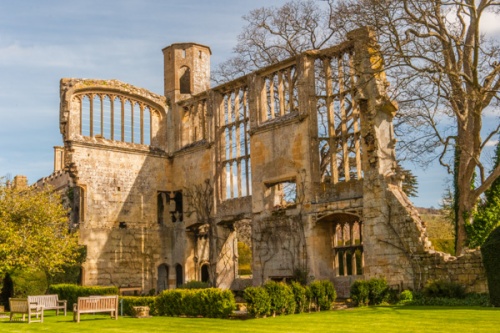 Ruined walls of the Banqueting Hall

The first mention of the Sudeley estate is in a 10th-century charter. At that time it was part of a larger estate at Hawling. It later passed to Ethelred, who kept a royal deer park in the oak woods there. Remains of the deer park boundaries can be seen today, though nothing of Ethelred's manor has survived.

Ethelred granted Sudeley to Goda, sister of Edward the Confessor. It was Goda who prevented Sudeley from being confiscated after the Norman invasion, as she was distantly related to William of Normandy. Her descendants held Sudeley through the early Norman period until 1368 when the property passed to William Boteler.

It was Boteler's descendant Thomas Boteler who was created the first Baron Sudeley in 1441. Thomas Boteler was a successful admiral who served under Henry V and Henry VI in the wars against France. With the riches he acquired from his service, Boteler rebuilt Sudeley into a comfortable country house. 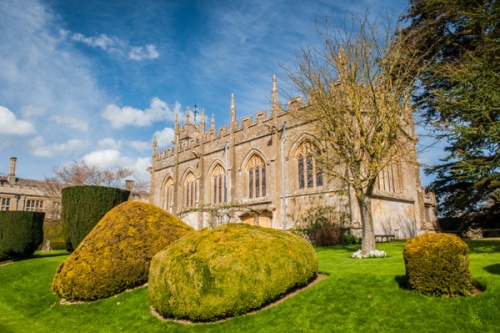 Much of the building work begun by Thomas Boteler can still be appreciated today, including the Tithe Barn, St. Mary's Church, and the Banqueting Hall. Boteler also built Portmare Tower, said to be named after a captured French Admiral whose ransom money paid for the tower's construction.

The powerful Boteler was forced to sell Sudeley to Edward IV when that Yorkist monarch ascended the throne. In 1469 Edward granted Sudeley to his brother Richard, Duke of Gloucester (later Richard III).

Richard later traded Sudeley back to the king in exchange for Richmond Castle. The castle was later owned by Jasper Tudor before reverting to the crown. Henry VIII seems to have neglected Sudeley, though he did visit here in 1532 with Anne Boleyn. 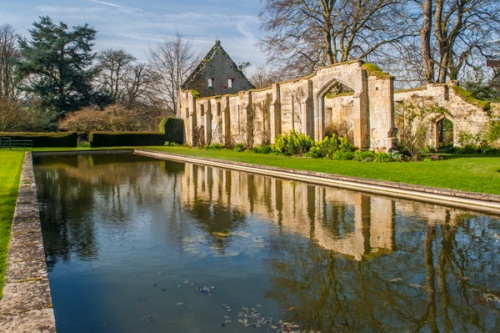 She was buried in St Mary's church, beside the castle, with Lady Jane Grey acting as Chief Mourner. Lady Grey stayed at Sudeley until her marriage and subsequent 9 days on the throne.

Mementoes of Katherine Parr are featured at Sudeley, including a portrait and a love letter written by her to Thomas Seymour where she accepts his offer of marriage. She rests in the church below a 19th-century marble tomb designed by Sir Gilbert Scott.

Elizabeth I is known to have visited Sudeley on three separate occasions when she was lavishly entertained in the Banqueting Hall. The robe worn by Elizabeth at her christening is on display inside the Castle.

A reminder of one of her state visits is the Persian Knot Garden, with clipped hedges shaped into a design inspired by the dress Elizabeth wore for the painting 'Allegory of the Tudor Succession', by Lucas de Heere. 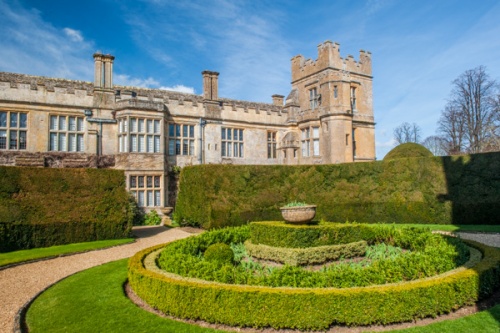 The Castle from the church

During the Civil War, the 6th Lord Chandos of Sudeley allied himself with the royalist cause and allowed the castle to be used by Prince Rupert, commander of the king's forces, as his command post. Charles I himself stayed here after his failed attempt to take Gloucester. The castle was taken briefly by Parliamentary forces, who plundered the house and wreaked havoc on the estate.

After the Roundheads left, the king once again took control. An amusing - and perhaps apocryphal - tale is told that King Charles was supposed to lead a cavalry charge against his foe. The troops were ready, but no king was to be found. Prince Rupert went in search of Charles at Sudeley, only to find the king calmly playing a card game of picquet!

The castle was taken again by Parliament in 1644 after a concerted attack. The Octagon Tower still displays the marks of cannonballs used in the assault. Although Lord Chandos was allowed to ransom Sudeley after the Civil War, it was slighted (made undefendable) by Parliament in 1649. Chandos himself died of smallpox in 1655.

The slighting of Sudeley destroyed much of the old house. The roof was removed and the buildings left at the mercy of the elements. For two hundred years the castle and chapel were left to rot, and local people used stone from Sudeley for their own building projects. King George III visited Sudeley in 1788 to see the ruins - and promptly fell down a flight of stairs! 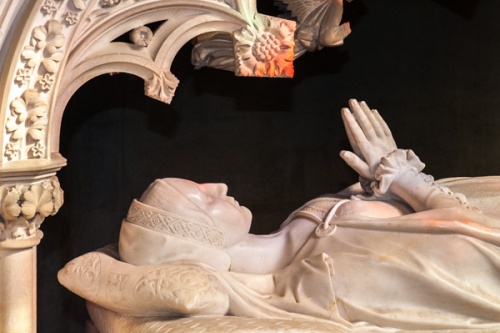 In the early 19th century the castle was used as a stable and pub. Finally, the house and estate were purchased by the brothers John and William Dent, a pair of wealthy glove-makers. It is to their intervention that we owe the present Sudeley Castle.

The Dents called in architect Sir Gilbert Scott to restore the chapel, they strengthened the walls and restored the interior of large sections of the castle. The final restoration was carried out by the remarkable Lady Emma Dent, who, over a span of 45 years at Sudeley managed to fill the interior with fine art and objects associated with the long history of the estate. 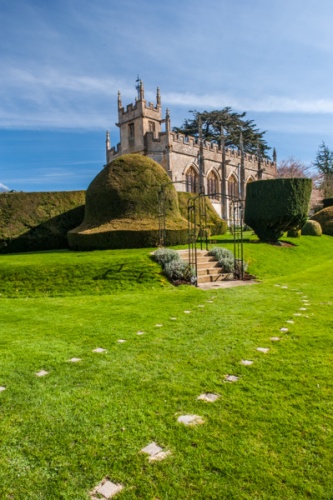 Some of the treasures on display at Sudeley include paintings by Rubens, Van Dyke, and JMW Turner, Civil War memorabilia, Tudor miniatures, and Jacobean embroidery. William Morris stained glass windows highlight the staircase, and in the Rupert Room is an ornately carved four-poster bed believed to have been made for Charles I.

Among the needlework on display is a lovely canopy made by Anne Boleyn for her daughter Elizabeth. Look for the 'Haunted Stair', which Victorian maids refused to descend, claiming they had seen a ghost. 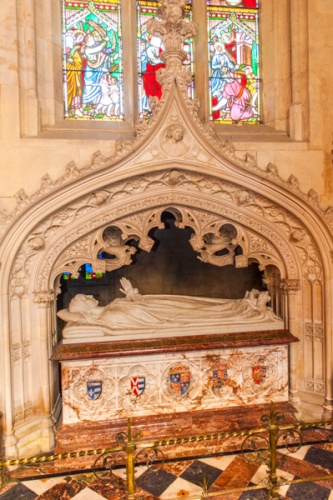 There is more to Sudeley Castle than the superb interiors and the ruined walls! The castle is surrounded by very enjoyable landscaped gardens, primarily the result of the 19th-century restoration.

The Queen's Garden is a model of the original Tudor parterre and is designed to look as it would have during the time of Katherine Parr. The gardens boast over 100 varieties of old roses, and a well-stocked garden centre is attached to the castle. Massive yew hedges give shape to the gardens. 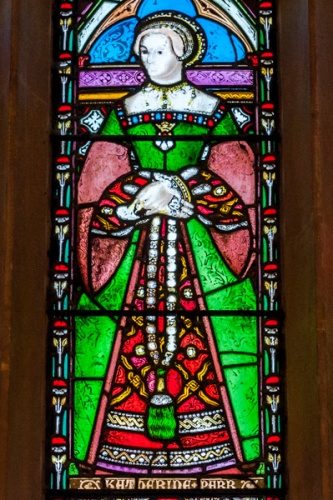 There are wildflower and nature walks, and some rather intriguing small garden areas including a scented garden and medicinal herb garden, featuring plants that were used in the medieval and Tudor periods. One of the newest areas is a Pheasantry which houses owls, pheasants and similar species from around the world.

To the north-west stand the impressive remains of the imposing medieval tithe barn, destroyed in the Civil War.

Sudeley is a wonderfully atmospheric place to visit and makes for a very enjoyable day out. I've had the pleasure of visiting on numerous occasions and always find it fascinating. 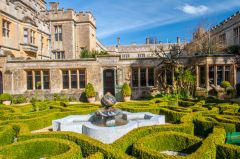 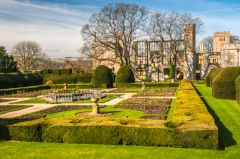 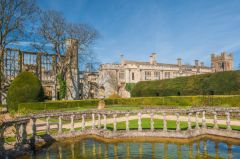 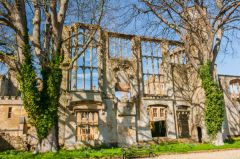 More self catering near Sudeley Castle