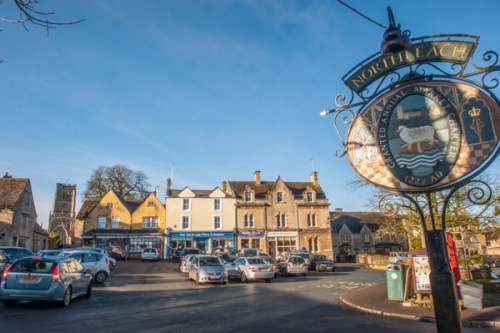 A lovely historic market town with a wonderful "wool church".

It is hard to imagine a more classic Cotswold market town than Northleach. Located just off the old Roman Fosse Way, Northleach is blessed with a profusion of lovely old cottages clustered about a wide green. Well, perhaps "green" is inappropriate, as it is not green, but paved to provide parking for small shops.

But that is a minor quibble; Northleach is really quite lovely, with some marvellous half-timbered buildings, such as the Sherborne Arms and the Red Lion pub that look onto the market place.

The roots of Northleach go back to the late 8th century when the Abbey of Gloucester laid out a village with plots of land arranged about a Y shape, with the market square at the junction of the arms of the Y. This new property development was named Northleach because it lay to the north of a "Leece" or stream. 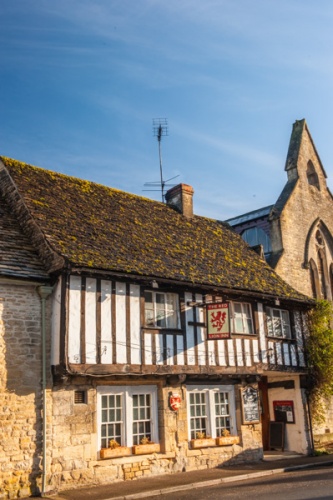 The village grew, and in 1227 Henry III granted a town charter and the right to hold an annual fair. This fair is still celebrated today as the Charter Fair, held on the last weekend of June. Another annual event is the Court Leet, or local election, held in November when officials are elected to judge the quality of the beer and food produced locally. A High Bailiff is also elected, as he would have been in the Middle Ages.

During the 18th century, Northleach was a bustling coach stop on the busy London to Gloucester route. At one time there were 20 inns to serve the coach passengers - a number which seems hard to imagine given the size of the town today.

The Church of St Peter and St Paul, Northleach is one of the finest Cotswold wool churches - and that's saying something! The church has been called "The Cathedral of the Cotswolds", and with good reason.

It seems at first glance quite odd that a small town like Northleach would possess such an extraordinary church, but the fact is easily explained with a little dose of history. In the medieval period, the Cotswold region was famous for the quality of the wool it produced.

So prized was this wool that many wool merchants became fabulously wealthy by the standards of their time. Some of this wealth was lavished on their local churches. 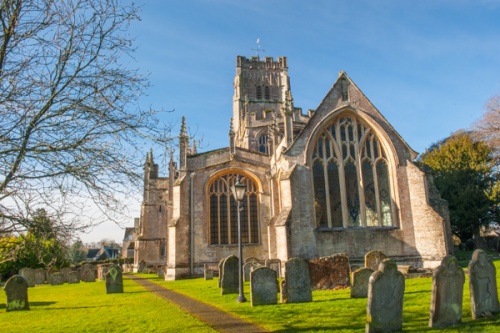 In this case, the splendour of St Peter's owes much to the generosity of the Fortey family, particularly John Fortey (d. 1458), who was responsible for the spacious nave with its airy clerestory. Fortey's memorial brass is in the north arcade. It shows him, fittingly, with his feet resting upon a woolsack.

The origins of the church go back to at least the 12th century, but much of what we can see today dates from the 15th century. The earlier church consisted of little more than an aisle, but in the 13th century, the chancel was added, with the nave, sacristy, and aisles to follow in the following century.

The prevailing style of St Peter and St Paul's is meant to showcase the large traceried expanse of stained glass windows, and this it accomplishes very well indeed! The two-storey porch (c.1420) is perhaps the most striking in the Cotswolds region if not the entire UK. The battlemented exterior is graced with a large statue of John the Baptist, the patron saint of the wool trade.

Take time to examine the font; it dates from the 14th century and features some finely carved heads and angels playing musical instruments. The pulpit is of the type called "goblet" due to its shape. It is one of the few dozen stone pulpits in the country to have survived the Reformation.

Also surviving was the high altar, which was hidden under the floor of the chancel by the townsfolk, and was only rediscovered in 1874.

The huge window over the chancel arch is known as the Cotswold Window (c.1430). It was the work of John Fortey and his kinsman, Thomas Fortey. Between them, the Forteys funded work which raised the nave, added the clerestory and aisles, and raised the roof. The result is a wonderfully light and open church, with rich carving and fine architectural detail.

Entering the porch you will notice carvings of a pig, and a cat playing the fiddle for three rats. This illustrates the satyrical rhyme by William Collingham, "The rat, the cat and Lovell the dog, ruled all England under the hog". The hog, in this case, is the King, whose emblem was a boar. The rat and dog were wealthy landowners, Ratcliff and Lovell, and the cat is William Catesby, Leader of the House of Commons.

Call this my editorial soapbox, if you will. I love Northleach. The church is magnificent, the setting of the town is a delight, and the wonderful mix of medieval architecture keeps me coming back again and again.

Apart from the church, there are no real 'attractions' in Northleach. The real attraction is the village itself and its beautiful setting. A few miles east is the National Trust's Lodge Park, an elegant 17th-century grandstand for nearby Sherborne house. 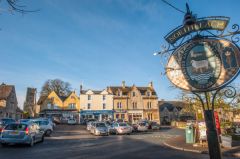 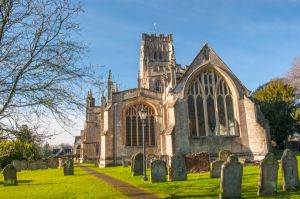 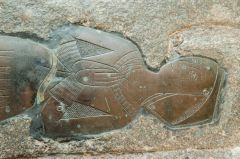 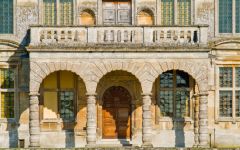 More self catering near Northleach

More bed and breakfasts near Northleach

Self Catering near Northleach