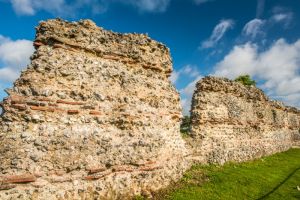 At the southern edge of Verulamium Park in St Albans stands a section of the city walls of Verulamium, the old Roman city of St Albans. The walls were constructed between AD 265 and 270. Surviving sections of the wall include the foundations of towers and the London Gate.

London Gate guarded the entrance to the city on Watling Street, the main route from Dover to Chester by way of London. Other gates guarded the routes to Colchester and Silchester. One curious fact is that the Roman city probably didn't have the military manpower to effectively man the gates and the city walls. That suggests that the walls and gates were more for show than security, and probably acted as a means to control access and collect taxes on goods flowing through the city.

London Gate is especially interesting. You can clearly see the foundations of a large gateway, with four passages through the gate. The two large inner passages were for horse-drawn carts, while the two smaller outer passages allowed pedestrians to pass.

The short section of city walls in Verulamium Park probably survived because it formed part of St Germain's Chapel, built in the 12th century. Stones from other parts of the wall were taken away for other building projects. Many of the stones were used to build St Albans Abbey (now the Cathedral). You can easily spot reused Roman bricks and stone in the base of the Abbey's 11th-century tower.

A short walk from the wall is a modern building covering the remains of Roman mosaics.

At the north corner of the park is the Verulamium Museum, showcasing finds from the old Roman city. 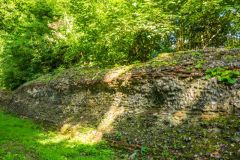 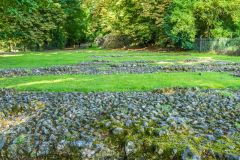 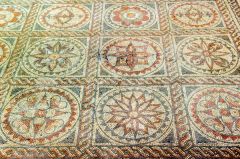 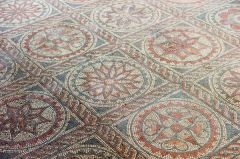