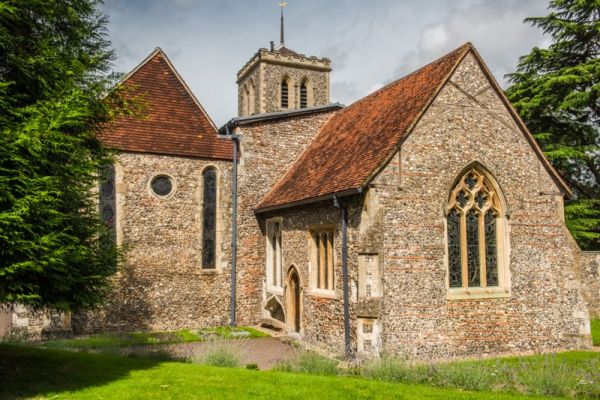 A few steps from the popular Verulamium Museum on the outskirts of St Albans stands the beautiful ancient church of St Michael, begun in the late Saxon period on the site of the Roman basilica of Verulamium. St Michael's is the best-preserved Saxon building in Hertfordshire.

The basilica was almost certainly the place where Alban was tried and sentenced to death for being a Christian. He was not executed here, but taken to a site outside the Roman town walls, possibly on the site where the Cathedral now stands.

Alban's connection with the basilica drew early Christians to this spot, and after the Romans withdrew from Britain in the early 5th century a church was built where the basilica had once stood. The earliest recorded church was erected by Wulsin, Abbot of St Albans in the middle of the tenth century. Wulsin also built the churches of St Peter and St Stephen at the same time.

Not surprisingly, St Michael's was built partly with Roman bricks. The oldest sections of the present building are the nave piers and the chancel arch. The church was enlarged in the late 12th century to form the building we see today, with the addition of a 13th-century Lady Chapel. 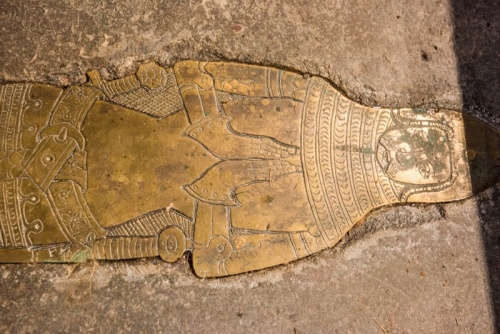 14th-century memorial brass of a knight

St Michael's was a daughter church of St Albans Abbey (now St Albans Cathedral) and was a focus for pilgrims coming to Alban's shrine in the Abbey itself. After the Abbey was suppressed by Henry VIII the patronage of St Michael's passed to the nearby Gorhambury Estate.

One of the owners of Gorhambury was the Tudor politician, author, philosopher and early scientist Sir Francis Bacon (1561-1626). The most impressive and historically important monument in St Michael's Church is Bacon's ornate memorial in the chancel.

Bacon had a successful political career, rising to become Attorney General and Lord Chancellor of England before he was forced out of office on charges of corruption.

Bacon then retired to his home at Gorhambury, just outside St Albans, where he devoted his time to the study of philosophy and evolved what would become known as the scientific method, the basis for modern science.

Bacon argued that knowledge had to be gained through empirical study, rather than based on faith or supposition. It seems an obvious principle today but in the early 17th century it was a radical idea and one that brought him into conflict with the established church. 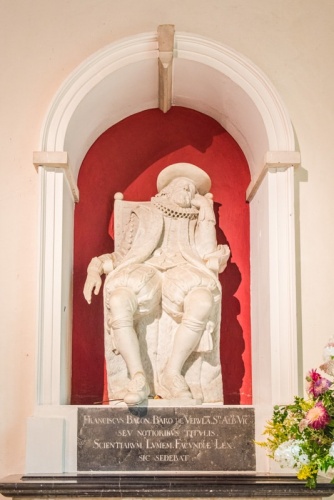 When Bacon died in 1626 he was buried in St Michael's Church. A short time later his friend Sir Thomas Meauty, who had acted as Bacon's secretary, paid for a memorial in the form of a large statue showing Bacon seated, one elbow on the arm of a chair, with his hand supporting his head on one side. It is an unusual depiction, showing Bacon in a relaxed, contemplative pose.

The base of the monument is carved with a Latin script that translates as:

Francis Bacon
Baron of Veralum, Viscount of St. Albans
or, by more conspicuous titles
of Science the Light, of Eloquence the Law, sat thus.

Who after all Natural Wisdom
And Secret of Civil Life he had unfolded,
Nature’s life fulfilled -
Let Compounds be Dissolved!

Of such as man, that the memory might remain
Thomas Meautys
living his attendant, dead his Admirer
placed this Monument

The Bacon monument is in a large niche on the north side of the chancel. 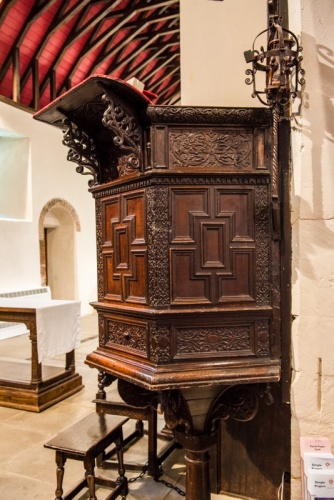 Other historical highlights include several 14th-century memorial brasses to members of the Pecok family. The oldest is to John Pecok and his wife Maud (d 1330). In the chapel is an ornate 14th century floriated cross. In the nave floor is a brass to Henry Gape (d 1558) and his wife Florens. On the south wall you can see the remains of a painted inscription to John Maynard (d 1556).

a pre-Reformation altar stone, a 15th-century roof and finely carved corbels, and a late Tudor pulpit and table.

There is a royal coat of arms from the reign of Charles II, and a beautiful 15th-century font carved from a single piece of stone. 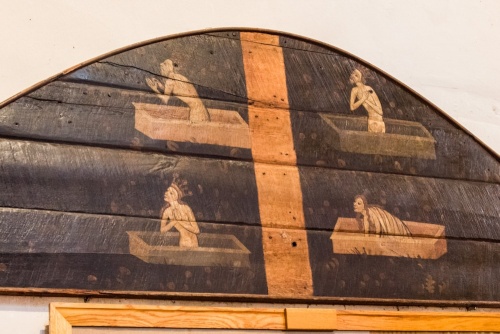 Even more fascinating are three remnants of medieval painting. One of the timber roof beams is painted, as is a lancet window embrasure in the nave, but the most interesting painting is a section of a 'Doom', a depiction of the Biblical Day of Judgement painted on a semi-circular section of wood.

The Doom has been dated to the 15th century. It acted as a tympanum at the top of the chancel arch. You can see an unpainted vertical strip where the medieval rood cross would have stood.

The Doom was boarded over at the Reformation and was covered by layers of lime wash. It was only rediscovered in 1808 during building work. The entire scene was sketched, and the tympanum rescued, before the arch was rebuilt in its present form. On the wall is a tapestry depicting the 1808 drawing of the entire Doom painting.

As for the tympanum, it shows six figures rising up from their coffins on the Day of Judgement. Two of the figures wear a crown and another appears to be wearing a bishop's mitre.

The stained glass is Victorian and of very high quality. Also Victorian are the oak pews, installed by Sir George Gilbert Scott in an 1860s restoration. The pews incorporate late medieval linenfold panelling.

St Michael's is usually open daily and was open when we visited. It is extremely easy to find from central St Albans. The easiest way to visit is to park at the large Verulamium Museum parking area off St Michael's Street. The church is directly across the street from the entrance to the parking area.

St Michael's is a delightful church with an air of history and a wealth of historical remains. It is well worth a visit. 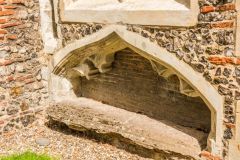 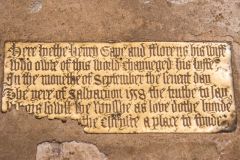 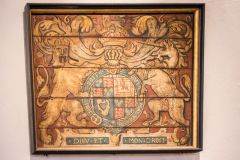 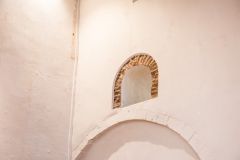