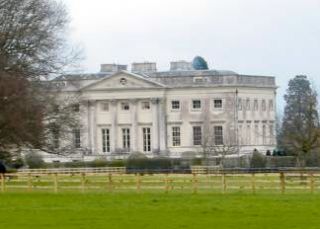 Gorhambury House
Gorhambury House is a Palladian mansion on the outskirts of St Albans, built by the Bacon family, Earls of Verulam, to replace an earlier Elizabethan manor. The ruins of that older house still stand in the park near the current mansion.

The earlier manor, now known as Old Gorhambury House, was the home of the most famous of the Bacon family, philosopher, writer, and lawyer Sir Francis Bacon (1561-1628).

In 1777 James Grimston, the 3rd Viscount Grimston, called in architect Sir Robert Taylor to create a fashionable new family home. Taylor is best known for his design of the Bank of England building in London.

At Gorhambury he created an elegant three-storey house in neo-Palladian style, featuring a double-height hall and a spiral cantilevered staircase. He also reused bricks from the older Tudor house to create the new building. The house was extended in the 19th century when the exterior was refaced in white Portland stone.

Within the house is a large collection of Bacon and Grimston family portraits. The house is full of art objects collected by generations of family members undertaking the Grand Tour of Europe. Highlights include the earliest pile carpet in England and 17th-century stained glass salvaged from Old Gorhambury. These windows were commissioned by Sir Francis Bacon.

There is regular entry in the summer months. Please check with the property for exact details. Access is by the estate drive on the A4147 (postcode AL3 6AE).

More self catering near Gorhambury House >>