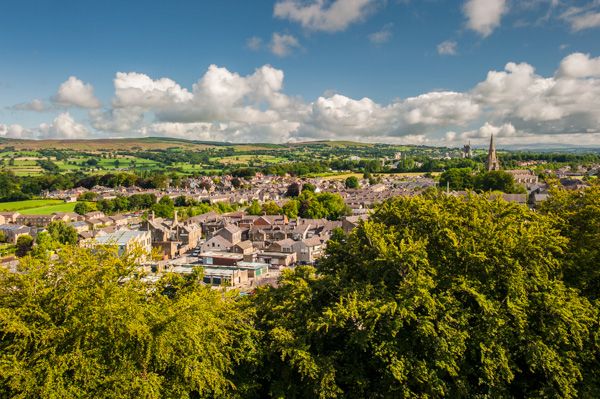 Clitheroe from the castle

The Lancashire town of Clitheroe stands on the east bank of the River Ribble about three miles north of Whalley. The long-distance footpath known as the Ribble Way follows the river as it flows through the edge of Clitheroe. The town name comes from the Anglo-Saxon words for a rocky hill.

The town of Clitheroe was not recorded in the Domesday Book. It seems to have grown up around an early Norman fortress established by Roger de Poitou, who was granted the Honour of Clitheroe by William the Conqueror.

From Roger de Poitou the estate passed to the De Lacy family, and was at one time part of the Duchy of Lancaster. In 1283 Henry de Lacy, 3rd Earl of Lincoln, granted a town charter (though the charter simply confirmed rights previously granted to the townsfolk by his ancestors). 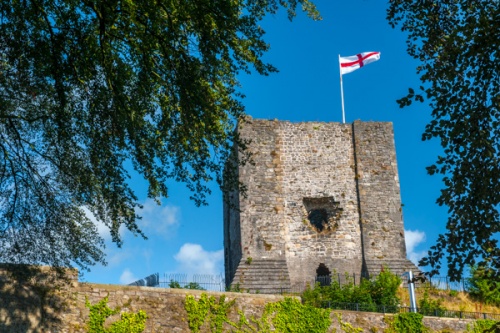 While there may have been an early Norman castle at Clitheroe, the present Clitheroe Castle owes its existence to Roger de Lacy, who began a stone keep around 1186. The keep is quite small, just 20 feet square, and is protected by curtain walls. The castle was the administrative centre for the Lords of Bowland (the title is now owned by the Crown).

The castle was allowed to decay in the late medieval period and by 1602 it was described as likely to collapse at any time. That didn't stop Prince Rupert from garrisoning the castle in 1644 during the Civil War, but he abandoned it after the Royalists were defeated at Marston Moor. Parliament ordered the castle to be slighted in 1649 to prevent it from being used against them.

The castle served as the administrative centre for Blackburnshire until the Town Hall was built in 1822. The borough council bought the site in 1920 to act as a memorial to the 260 men of Clitheroe who died in World War One. 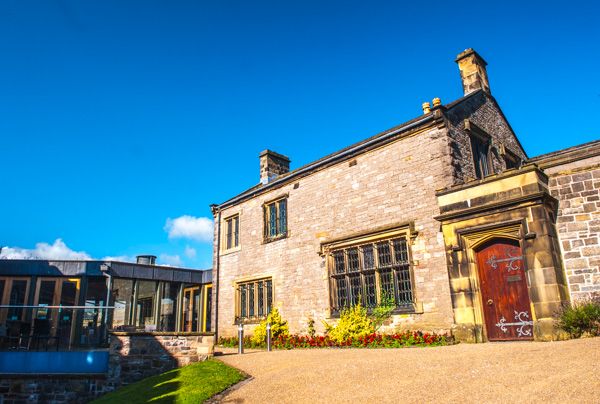 Within the castle walls is the Clitheroe Castle Museum, housed in the 18th-century Steward's House. Beside it is the old courthouse, now a gallery space. The museum is home to over 5,000 objects covering the social history of Clitheroe and its castle, with a smaller collection of geological specimens, natural history, costume, archaeology and local art.

In 1464 King Henry VI took refuge in the Bowland district after his defeat at the Battle of Hexham. He was hiding at Waddington Hall when he was betrayed. He managed to escape from the Hall by a secret staircase and made his way across the river Ribble via the Brungerley Hipping-stones (stepping stones) but was captured soon afterwards just a mile from Clitheroe Castle.

In 1520 a miller named Nicholas Ranfurthe caused a scandal in Clitheroe church when he hid his face and eyes when the host was raised rather than looking up to it. He was fined 6s and 8d after the jury decided that to let his misdeed go unpunished would set a bad example. Perhaps it did not help his cause that the miller was accused of overcharging - as many millers did.

In 1612 one of the infamous Pendle Witches, Margaret Pearson, was acquitted of witchcraft but sentenced to stand in the pillory at Clitheroe. 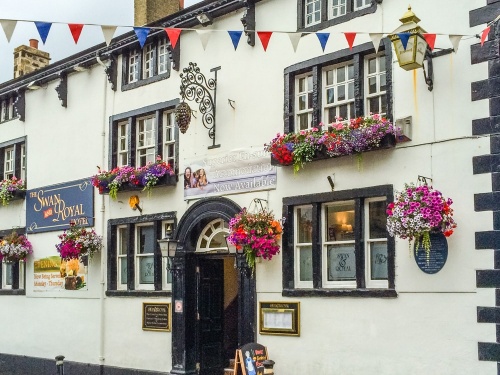 The 18th-century Swan and Royal Hotel

Clitheroe was a 'rotten borough', sending two MPs to Parliament until the Reform Act of 1832 cut the town's representation by one.

The parish church is dedicated to St Mary Magdalene. Very little of the medieval building remains after a restoration in 1828. Two medieval effigies were discovered during the restoration and these now lie in the south aisle. One shows an armoured knight and the other depicts a lady wearing a kirtle. There is also a good table tomb to John Harrison (d 1718) and a memorial brass to John Webster (d 1682), inscribed with a horoscope.

Clitheroe Royal Grammar School was established in 1554 as 'The Free Grammar School of King Philip and Queen Mary'. It had a rather sweeping mandate to educated young men and boys in grammar 'to be and to continue for ever'. The days of only educating boys are long past, and today the school welcomes both boys and girls.

You can learn more about Clitheroe's heritage by following the Town Trail, produced by the Ribble Valley Borough Council. The trail links 34 places of historical interest, from the medieval castle to coaching inns and the residence of the famous 20th-century artist LS Lowry.

Take in the Yorkshire Bank building in Market Place, the childhood home of Captain James King, who served as the astronomer for Captain James Cook on his voyages of discovery. Then there is the Swan and Royal Hotel and its links to the development of the jet engine. Sir Frank Whittle designed a jet engine and sold the design to Rolls Royce over a meal at the hotel. Whittle Close stands on the site of the jet engine test beds used by Sir Frank. 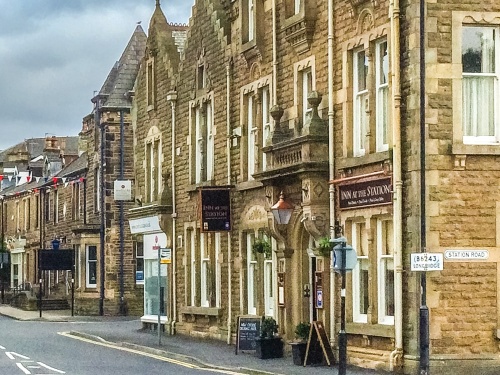 Clitheroe is within easy reach of several outstanding historic sites. Just 4 miles away is Whalley Abbey, a ruined 14th-century Cistercian monastery on the River Calder. Just a bit further away is Sawley Abbey, a 12th-century monastery on the River Ribble. Then there is Browsholme Hall, a Tudor manor house extended in the Regency period. Browsholme is the seat of the Parker family, the hereditary Bowbearers of the Forest of Bowland.

Clitheroe is on the A671 about 10 miles north-east of the centre of Blackburn. I stayed for a week at a holiday cottage in the lovely little village of West Bradford and would walk over the River Ribble into Clitheroe to visit the castle.

More self catering near Clitheroe

More bed and breakfasts near Clitheroe

Self Catering near Clitheroe