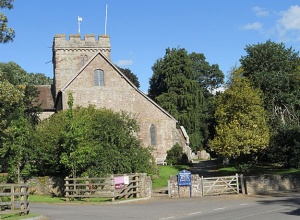 The church of St Peter dates to about 1050, with later rebuilding in the 13th and 16th centuries. The church stands within a much earlier Saxon enclosure (6th-9th century). You can still see original Saxon stonework in the west and north walls of the church. There are Saxon pilaster strips in the north wall of the nave and the east and west walls of the north transept.

The Victorians could not resist 'improving' the church, and to them, we owe the current vividly coloured stained glass windows, the altar, and the carved reredos of Caen stone.

The church is built to a cruciform plan, with a sturdy central tower. The nave and north transept are the oldest parts of the church, both retaining many late Saxon or early Norman features, while the tower is Early English and the south aisle 14th century.

There is a blocked north doorway which probably dates to the late Saxon period. Above the interior face of the doorway is a carved panel, dated to the 11th-12th centuries, while another fragment of worn 12th-century carving has been reset in the wall over the north doorway. The nave arcade is 14th century, as is the octagonal font and canopied piscina. 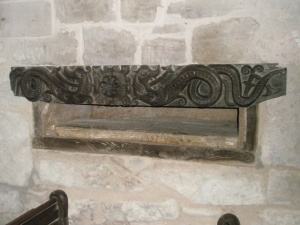 St Peter's originally served as the mother church for nearby Ludlow. How the fortunes of each have changed! Ludlow grew to be the largest town in the region, while Stanton Lacy is today a small, peaceful village.

According to (unconfirmed) legend, Stanton Lacy's church is haunted by the ghost of a man killed by Parliamentary troops during the English Civil War.

More self catering near Stanton Lacy