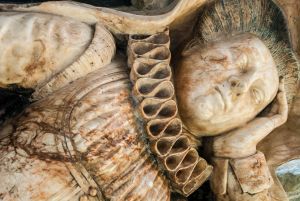 One of the truly outstanding medieval town churches in England. St Laurence's nickname 'The Cathedral of the Marches', reflects the importance of Ludlow in the turbulent Welsh Marches region, but also the impressive size and rich furnishings this 12th-century church.

The Normans erected a church here as part of the planned building of Ludlow town, in the shadow of the great castle. That church was rebuilt around 1199, then again - and more profoundly - in the 15th century when the wealthy guilds of Ludlow merchants lavished their wealth on the church and erected great family tombs within the new edifice they created.

Foremost of these merchant guilds was the Guild of St Mary and St John, more commonly known as the Pilgrim or Palmers Guild. Membership in the guild was reserved for those who had undertaken a pilgrimage to Jerusalem; no mean feat in those days. To show that he had completed his journey, the pilgrim would bring back a palm leaf, giving rise to the name Palmer. 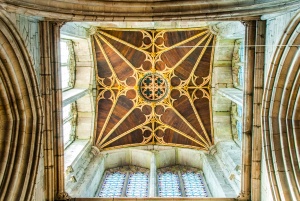 The rich merchants who made up the membership of the Palmers built a cruciform church entered by a peculiar octagonal porch. The interior is a Perpendicular Gothic delight, with slender arcades and a striking tower arch.

Stand under the crossing and look up, high up to the tower roof. It is a wonderful piece of late medieval architecture, but even so, it is overshadowed by the chancel and its chapels.

The north chapel was built by and for the Palmers Guild, and the guild paid for a half-dozen full-time priests to say Mass for their souls. The remarkable thing about the Palmer Chapel is that it still has its original 15th-century glass.

One window shows Palmers on the road to Jerusalem, shown by their blue robes, and set into the north chapel wall is a depiction of the Annunciation, a masterpiece of medieval glass that can rival any in England. Also in the chapel is a faded section of medieval wall painting.

Opposite the Palmers Chapel is the Lady Chapel, which seems to be overflowing with dedication boards and Biblical texts. Within this chapel is another superb medieval window, with glass depicting the Tree of Jesse. The window has been restored, so it is not completely original, but it is true to its original colour scheme and design.

While the chapels are remarkable for their glass, the chancel is a treasure of medieval stalls, many with misericords. These 'mercy-seats', made to help support priests while standing during long services, have wonderfully carved undersides. There are 32 stalls, most beautifully carved with poppyhead ends. The most noteworthy misericord depicts the Pieta and is a masterpiece of late 15th-century woodcarving.

Though the stalls themselves are wonderful, it is the misericords that deserve the most attention. These are carved in a range of subjects including mermaids, a witch, and a dishonest ale-wife; indeed, most of the misericords depict women unfavourably. 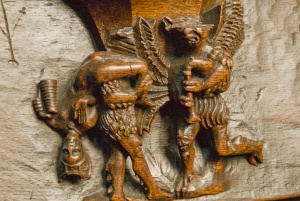 A dishonest alewife hauled off to Hell 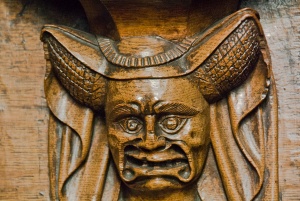 Parody of a fashionable headdress? 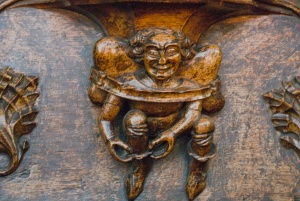 A pedlar pulling on his boot 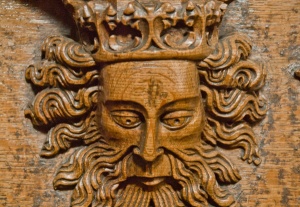 A king, said to be a likeness of Richard II

The chancel east window contains about half its original medieval glass and depicts the martyrdom of St Laurence. Also in the chancel are a wonderful array of memorials., most dating to the 16-17th centuries. Among the finest memorials is that of Sir Robert Townshend (d. 1581), and of Ambrosia Sydney (d. 1574).

Even more to my taste is the ornately gilded memorial to Edmund Walter (d. 1592) and his wife Lucy. Walter was a Justice, an official of the Council of the Marches who administered the Welsh Marches.

There is certainly much more to St Laurence than the chancel and chapels. The font is a very worn bowl, dating the first Norman church on this site.

Prince Arthur, son and heir of Henry VII, died in Ludlow in 1502 and his heart was brought to St Laurence for burial. A plaque set into the floor of the chancel marks the presumed spot where the heart was buried though no evidence of the actual burial remains. It is hard to see the memorial and not wonder how history might have been different if Arthur had lived and ascended to the throne instead of his brother Henry.

St Laurence is one of the Greater Churches Group, a select group of England's finest churches.

St Laurence is peculiar in that it is crammed in by surrounding buildings, tucked away so that you hardly know it is there until you are practically on top of it. But, oh, my, when you are inside it, what an experience.

Simon Jenkins rates Ludlow's church as one of just 18 in England worthy of a 5-star rating. I can't really disagree with that; there is so much history, from some of the best medieval glass in the country to some of the finest misericords, to a collection of superlative memorials. If you enjoy medieval churches, you will love St Laurence. 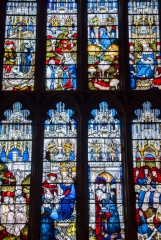 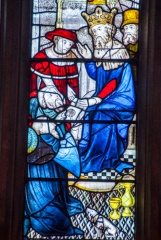 Edward the Confessor -
from the Palmers Window 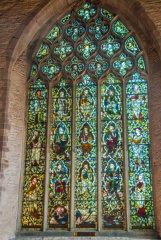 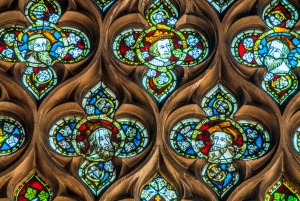 Detail from the Jesse Window 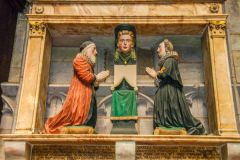 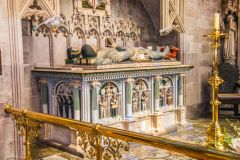 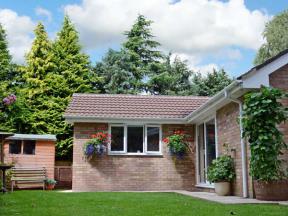 Sleeping five people in three bedrooms, this welcoming bungalow is just ten minutes’ walk from the centre of Ludlow in Shropshire.
Sleeps 5 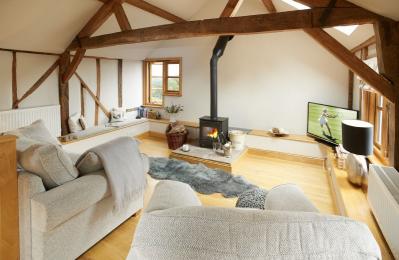 This delightful barn is nestled on the side of a hill and sits directly upon the historic Mortimer Trail, only twenty minutes by car to the Welsh Border. Spectacular, panoramic …
Sleeps 2