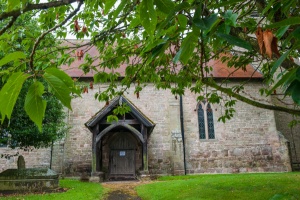 The attractive village of Orleton lies in lovely countryside north of Leominster. The name translates as 'village in the alders'. The church dates to the Norman period, though most of what we see today is from the 13th and 14th century. There are a pair of Norman Romanesque doorways, one in the west wall of the tower and another leading from the chancel to the vestry. The nave is 12th century and the chancel is early 13th century, with a west tower of the same date.

One historic remain rises above all others at Orleton, and that is the utterly superb 12th-century font, attributed to the Herefordshire School of carvers who also decorated the churches at Kilpeck and Shobdon, as well as other excellent fonts at Eardisley and Castle Frome. Here the font is made of limestone, in a bucket shape, decorated with figures of 9 apostles linked by a Romanesque arcade.

Only the figure of St Peter, obvious by the keys he carries, can be readily identified. Not as ornate or intricate as Eardisley and Castle Frome, the Orleton font is nevertheless a wonderful example of 12th-century craftsmanship and well worth a special trip to see. 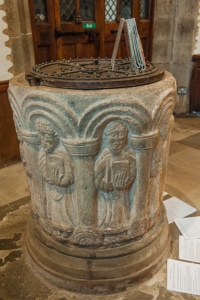 The roof is a beautiful example of medieval construction, with king and queen posts linked with massive tie-beams. Fragments of medieval glass have been gathered in the windows of the nave, including heads of a female saint and a priest in the north-east window.

Also in the nave is a broken piece of stonework carved with the likeness of a dragon, or monster, dating to the late 12th century and formerly used as a door-jamb and a clock-weight. This, like the font, is attributed to the Herefordshire School of carvers. It is on display near an old tower clock mechanism, dating to around 1700 and featuring an unusual 'kick-starting; system of striking the hours.

On the chancel wall is both a brass tablet and a stone slab to Thomas Blount, who died in 1679, erected by his wife Anne. Thomas was a lawyer, or as his inscription puts it, 'A member of the Inner Temple'.

He was also, according to his epitaph, 'A man endowed with the faith and manners of old, of blameless life and absolute goodness...' Anne Blount's own memorial is set on the north wall. Nearby is a memorial to his father, Miles Blount (d. 1663), who 'finally fell asleep in the Lord in the fulness of his years, aged 78, renowned for his devotion to God and loving kindness to his family.' 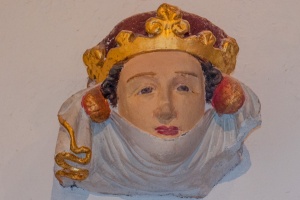 The chancel arch is a veritable tableau of early 13th-century intrigue and political ferment. On the south side of the chancel arch is a carved head thought to represent Adam de Orleton (see below) while at the peak of the arch is a carving of Roger Mortimer, briefly regent for Edward III with his lover, Queen Isabella. On the south side is Edward II himself, below a small bust of his favourite, Piers Gaveston. On the north side of the arch is a likeness of the Abbot of Wigmore.

The pulpit is Jacobean, with lovely carved panels arranged in tiers of arches and arabesques. In the vestry is not one, but two 13th century chests, used for storing valuables. These still retain their original iron strap hinges. One is a dugout, formed from a single log. The south porch dates to 1689, with decorated barge boards. A 14th century cross with a modern head stands in the churchyard. 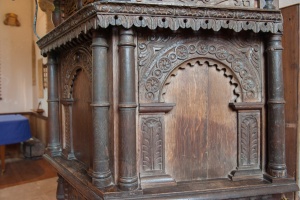 Perhaps the most famous native of Orleton was Adam de Orleton, who became Bishop of Hereford in 1316. Bishop Adam supported Roger Mortimer and Queen Isabella in their rebellion against Edward II. He pressured Edward to abdicate in favour of his son, the future Edward III, and may have been implicated in the king's murder at Berkeley Castle in 1327.

Despite his involvement in Edward's imprisonment and death, Bishop Adam was elevated to the bishoprics of Worcester and Winchester under Edward III. He is buried in Hereford Cathedral.

As famous as Adam of Orleton became, certainly in his own lifetime, he did not have the same impact on St George's church as Mr Rodney Proctor of the US, whose great grandfather and great-great-grandfather both served as vicars here in the 18th century. Mr Proctor restored the church at his own expense in 1956 to honour his ancestral connection to Orleton. 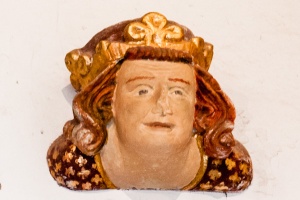 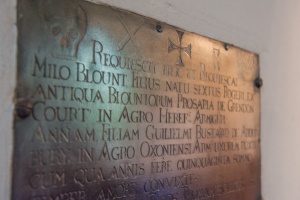 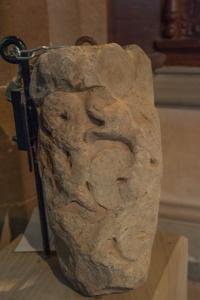 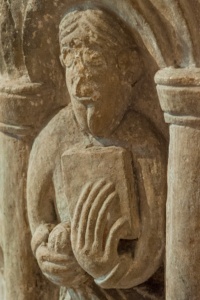 Apostle carving on the font 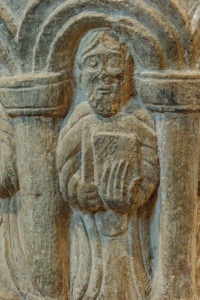 Apostle figure on the font 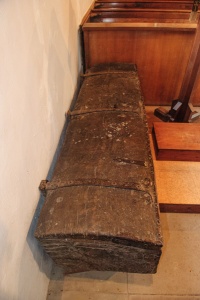 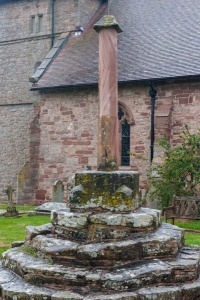 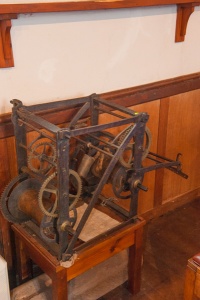 More self catering near Orleton

More bed and breakfasts near Orleton

Self Catering near Orleton