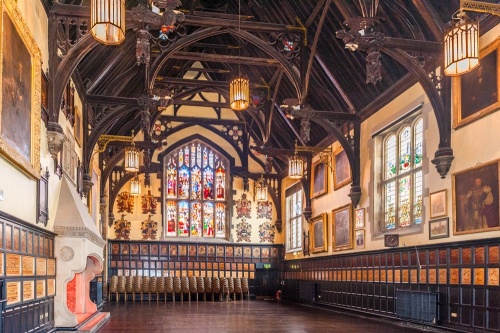 On the west side of Durham's historic Market Place stands one of the city's hidden gems; the Town Hall, sometimes known as the Guildhall, though in reality, the Guildhall and Town Hall are separate buildings.

This beautiful historic site has been the seat of Durham's civic administration since the 14th century. It is now open to visitors on a limited basis and can be hired for private functions. 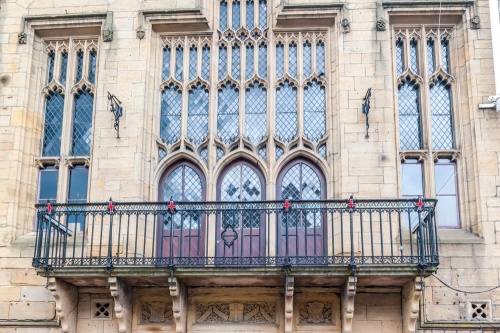 The Town Hall is not one building but a complex of linked buildings. The earliest part of the complex was erected in 1356 to serve as a meeting place for the city's merchant guilds. That first Guildhall was a simple timber structure, but it was rebuilt in stone by Bishop Tunstall in 1535 and again by Bishop Cosin in 1665.

This is the building we see today facing onto Market Place. To the rear is the 'new' Town Hall, built in 1851. Built at the same time was the indoor market, which stretches on either side of the hall and extends directly underneath it.

As you enter the Town Hall you can see a stone corbel from the original 14th-century guildhall. Inside the Hall is a Jacobean chimneypiece and overmantel brought here from the former Red Lion Inn, now part of Hatfield College. 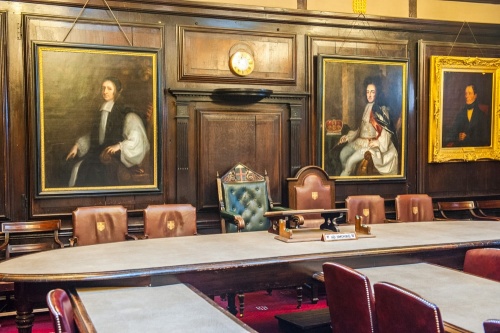 The Town Hall has a fascinating exhibit on the powerful Prince Bishops of Durham, who exercised an almost kinglike rule on norther-eastern England. Here you will learn about the history of the Mayor and the Mayor's Bodyguard, who have been based at the Town Hall since 1602.

Another exhibit looks at the remarkable life of Jozef Boruwlaski (1739-1837). Known as 'The Little Count', Boruwlaski stood just 3'3" tall. He followed a number of patrons around the high courts of Europe, performing as a musician but primarily being shown as a curiosity. He retired to Durham in 1791 on the invitation of Thomas Ebdon, the organist of Durham Cathedral, and died here in 1837. He is buried in the cathedral near his friend, the actor Stephen Kemble. 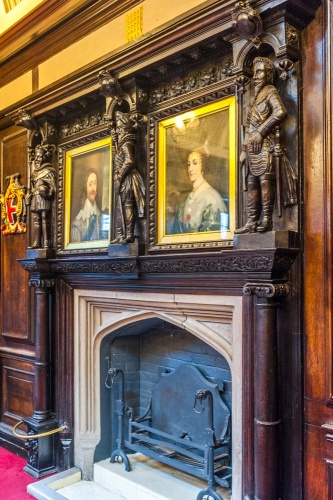 The Jacobean chimneypiece and overmantel

The walls of the Town Hall are lined with portraits of former Mayors and plaques commemorating people who have been made Freemen of the City of Durham. Among those commemorated in this way is Archbishop Desmond Tutu, author Bill Bryson, and football manager Sir Bobby Robson.

You can also visit the council chambers, where the Mayor and aldermen meet, and see robes worn by the members of the Mayor's Bodyguard.

The Town Hall is a fascinating complex of historical buildings. It won't take long to explore but it is well worth popping in for a visit.

The Town Hall is in the Market Place, off Silver Street. I highly recommend using the park and ride, but there are free and pay and display parking areas around the city centre.