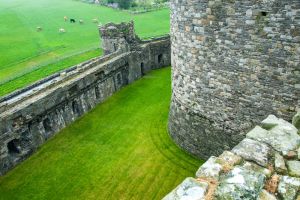 Beaumaris Castle is a concentric castle begun in 1295 for Edward I. The castle stands on a marshy plain (the name means "beautiful marsh"). Beamaris was designed by James of St. George, who also worked on Harlech. The innovation here was staggered entrances between the inner and outer walls. The castle was never finished, as the Welsh threat evaporated.

The layout of the castle was adapted to the terrain; the wide expanse of flat land on the northern verge of the Menai Strait allowed James of St George to create a perfectly concentric fortification without having to allow for the uneven terrain usually found with hilltop castles like Harlech. At Beaumaris St George was able to create a splendid architectural structure without inhibitions.

Construction began in the summer of 1295, with 2,000 labourers, 400 masons, plus 30 smiths and carpenters. Stone for the work came from quarries at Benllech and nearby Penmon.

The inner ward is arranged with perfect symmetry, one side an exact mirror image of the other. Only in the curtain walls of the outer ward does the symmetry break down, and in the arrangement of the two main gates. The landward Llanfaes Gate and the seaward Gate next the Sea are staggered at an offset from the inner gates, so that an attacker able to pass the outer gate would have to turn one way or the other to reach the inner gates, and thus be exposed to archers atop the walls of the inner ward.

The South Gate defences were further strengthened with the addition of a barbican, with a series of portcullises and murder holes.

The inner ward is beautifully constructed with four corner towers and two drum towers in the centre of the east and west ranges. The gatehouses on the north and south ranges were built to provide lavish accommodation. Accommodation at Beaumaris was extravagant by the standards of other Edwardian castles; there were three suites of chambers, the best preserved is next to the chapel at the north east end of the inner ward. The chapel is a beautifully constructed chamber with lancet windows above intricate arcading. 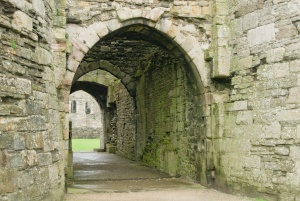 One of the unique features of Beaumaris is that it was linked directly to the Menai Strait, meaning that ships up to 40 tonnes could tie up at its little dock and unload supplies straight into the castle.

Work on Beaumaris was suspended during Edward's Scottish campaigns from 1300-1306, but was resumed in 1306 and continued until sometime around 1330. Even then, after some 35 years of work, the castle was unfinished, and the grand design of James of St George remained incomplete. Though the major defensive plans were largely finished, the sumptuous royal apartments envisaged by the architect remained a concept only.

Beaumaris fell to the Welsh in the Owain Glyndwr uprising of 1404-5, but the English retook it two years later when the Welsh resistance crumbled. The castle was left to decay for centuries, though it served as a prison for the Catholic martyr, William Davies(d. 1593). A memorial to Davies was erected in Beaumaris in 1909.

The castle was refortified for the king during the English Civil War, but it was taken by Parliament in 1648. It was slighted in the 1650s, and remained the property of the Bulkley family of Baron Hill until 1925 when it was placed in the guardianship of the Ministry of Public Buildings and Works. It is now cared for by Cadw.

Aside from the architectural and historical significance of the castle, it is well worth a visit just for the superb views eastward across the Menai Strait to the peaks of Snowdonia. The view and the ambience of the location proved an inspiration to artists like JMW Turner over the centuries, and they will undoubtedly delight you, too!

Do take the time to stroll around Beaumaris town while you are there; there are quite a number of interesting historical buildings, many of which are outlined in a heritage trail leaflet available locally. The parish church of St Mary and St Nicholas is well worth a visit; it holds the tomb of Joan, daughter of King John of England and wife of Llewelyn the Great, Prince of Wales. 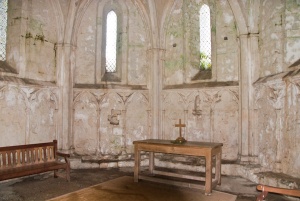 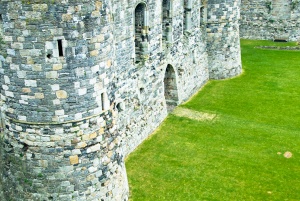 The view from the castle parapet 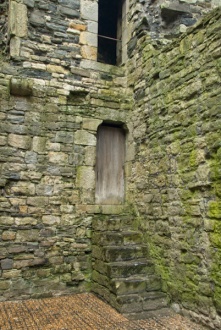 Stairs to the first floor
of the tower 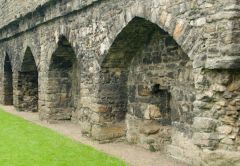 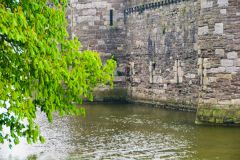 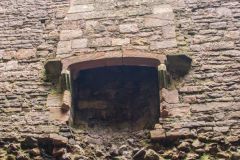 More self catering near Beaumaris Castle >> 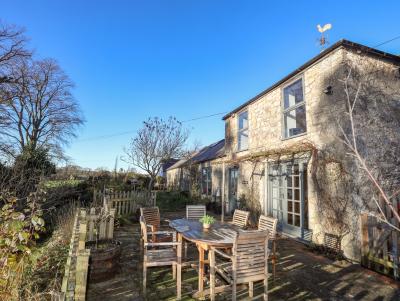 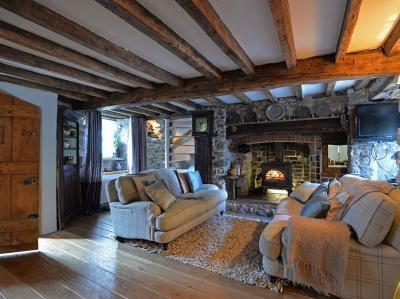